Where will mixed couple's child study? 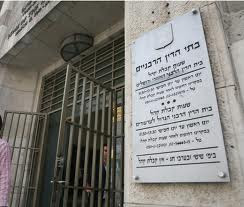 The Tel Aviv Rabbinical Court ruled recently that the son of a divorced ultra-Orthodox father and secular mother would study in a state-religious kindergarten and school.

The couple got married several years ago when both man and wife were still secular, but shortly afterwards the woman became religious and convinced her husband to join her. The man slowly became a devout Jew, while his wife began leading a secular lifestyle again.

About half a year ago, the couple's marriage reached a breaking point and they decided to get divorced. The child's education was one of the issues discussed even before the actual divorce, with each parent insisting on their own religious affiliation.

At first, the parents agreed that the child would study in state-religious institutions and that the court would decide from which age.

The divorce was granted and implemented, the judges scheduled a discussion on the agreement's implementation, but then the woman argued that when she had signed the agreement she did not fully understand all of its clauses.

The mother presented a new claim, saying that if the child would grow up in her home he may suffer from the contradiction between the religious education and her secular lifestyle.

The father's lawyer replied that the state-religious education system has many students whose parents are not religious, and that "no child has ever been damaged by studying Judaism in a pleasant way and not forcibly."

According to the lawyer, "Tolerance and pluralism do not exist only when one opinion is accepted. Reducing the struggle and focusing on what is best for the child and on strengthening his religious identity will only help in his upbringing."

The Tel Aviv Rabbinical Court accepted the husband's stance, ruling that the child would be educated in the state religious school system. Moreover, the court decided that the child's religious education would begin as early as the next school year, at the age of three.

"Although the mother is the custodial parent, it is in the child's best interest to have a good connection with his father as well," the judges wrote in their decision. "The mother's desire to give the child a secular education does not reflect concern for the child's welfare but for the mother's personal convenience only."

According to the judges, "The religious conflict issue depends greatly on the desire and sensitivity of the custodial parent, and on ensuring that the child will not be hurt."

The court concluded, "State-religious education appears to be a suitable solution for such a case of extreme contrast between the parents' outlooks. This educational system is open and suitable for mixed and secular families as well, and the child will be able to fit in."
Posted by joe levin at 5:26 PM