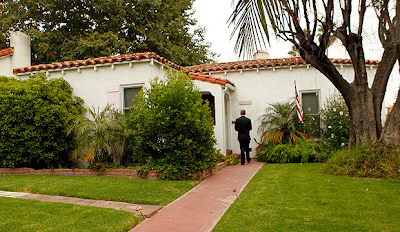 Three men claiming to be FBI agents forced their way into a Burbank home just after midnight Wednesday and made off with $20,000 in cash, police said.

The men, clad in dark clothes, gloves and ski masks, banged on the door in the 1000 block of East Fairmount Road, identifying themselves as federal agents to the married couple and their teenage son inside.

When the residents opened the door a crack, the men pushed their way in, with one of the robbers flashing a handgun, police said.

They demanded cash, and made off with thousands stuffed into a purse, said Burbank Police Sgt. Adam Cornils.

Cornils said it was unclear why the family had so much cash, or whether they were targeted. No one was injured.

The men made their getaway in a car, but police had no clear description of the men or their vehicle.
Posted by joe levin at 6:02 PM