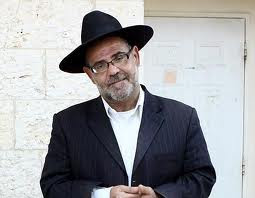 The man who stabbed Rabbi Elazar Abuhatzeira to death at his Beersheba yeshiva late Thursday night ,sending the haredi world into deep shock, has been sent by a court for a psychiatric examination to determine his mental state.

Asher Dahan, from Elad, between Rosh Ha’ayin and Shoham, told police he did “not mean to kill the rabbi.”

Dahan was reportedly upset that a blessing he had received from the 63-year-old religious figure did not materialize, although no clear motive has yet been established by police.

Tens of thousands of people attended Abuhatzeira’s funeral in Jerusalem on Friday afternoon, which was secured by hundreds of police officers.

The procession set out from the Porath Yosef yeshiva in the Geula neighborhood, where Abuhatzeira was eulogized by Chief Rabbi Shlomo Amar, Shas spiritual leader Rabbi Ovadia Yosef and others.

Mourners walked to the Mount of Olives, where Abuhatzeira was laid to rest next to the grave of his father, Rabbi Meir Abuhatzeira.

The slain rabbi was the grandson of Rabbi Yisrael Abuhatzeira (1890- 1984), known as the Baba Sali, who was believed by his followers to work miracles and was one of the leaders of the aliya of Moroccan Jews to Israel. Like others in his family, the Baba Elazar, as he was called, was an expert in Kabbala, and people sought his advice and blessing on various matters.

He was known for wearing a cloak whose long hood covered most of his face so he would not see any immodest images of women. He had a tunnel dug between his home and the Beersheba yeshiva he headed.

Abuhatzeira’s funeral was attended by Chief Rabbis Amar and Yona Metzger, as well as by haredi MKs and ministers.

Shas issued a message saying the movement “was in pain and mourning with all Jews over the great loss of the holy tzadik [righteous man].”

Three of the mourners were evacuated to Bikur Cholim and Sha’are Zedek hospitals to receive further treatment.

Prime Minister Binyamin Netanyahu on Friday expressed his shock at the murder.

“The rabbi was a spiritual leader to so many Israelis. He helped them with advice and charity, and very often he did this in secret,” the prime minister said.

Abuhatzeira was attacked by Dahan in Beersheba after the latter entered his study as a visitor. The rabbi was rushed to the city’s Soroka University Medical Center. Paramedics tried to resuscitate him, but he died en route.

The rabbi’s followers took Dahan into their custody and delivered him to police.