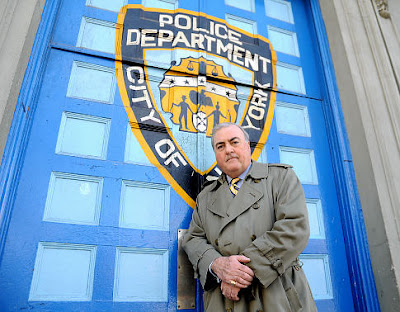 The former NYPD detective, who spent 25 years on the force, and another 18 as television reporter for WNYW and WPIX, is now working a beat that combines both worlds.

Sheehan has been drawing on his experience investigating some of the city's most infamous crimes - including the Robert Chambers preppie murder case - to work as a staff writer and consultant on one of NBC's most anticipated fall series.

The show, "Prime Suspect," which debuts on NBC in September, stars Maria Bello, Aidan Quinn and a cast of actors who are "based on guys I knew," Sheehan says.

The crime drama is a reimagining of the hit British series of the same name, which starred Helen Mirren as Scotland Yard detective Jane Tennison.

Peter Berg's Film 44 production company worked with Executive Producer and writer Alexandra Cunningham ("Desperate Housewives," "NYPD Blue") to adapt the premise to N.Y.C., where the pilot and a number of scenes have been shot on location.

Sheehan says a number of the series characters have even been named after his former colleagues.

For instance, the bellissima Bello plays Det. Jane Timoney, an homage to the NYPD's former First Deputy Commissioner John F. Timoney, who was a classmate of Sheehan's at the police academy.

Like Mirren, Bello plays a no-nonsense detective, and Sheehan says the American version of "Prime Suspect" will be a no-nonsense show.

"This is going to be one of - if not the - most authentic shows about a detective squad that you'll ever see," says Sheehan who, in addition to the Chambers case, worked on John Lennon's murder and investigated New York's zodiac killer.

Those headlines-making crimes won't be replicated on "Prime Suspect," but Sheehan says his experiences informed the writing and some of the story lines.

"Basically, you're going inside my head and I'm telling you how it was," he says about his first full-time foray into TV writing. He has previously worked as a consultant on movies and acted in a few, including "Carlito's Way" and "Rocky V."

To aid with authenticity, Sheehan says he took many of the cast members around to his old Manhattan stomping grounds, and he believes the field trips really paid off.

"There was a night we were shooting. I closed my eyes, and I swear to God I was back at the detectives squad," he says.
Posted by joe levin at 7:16 AM