Julie Pacino, seen her with her famous father 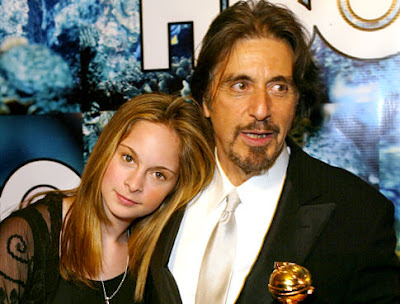 Julie Pacino told cops she downed three beers and "smoked weed at home" after her 2009 black Mercedes-Benz was stopped at a police checkpoint on West Houston St. near Washington St. about 1:20 a.m., prosecutors said.

"Yes I was drinking," Pacino told cops, according to prosecutors. "I had about three beers and I smoked weed at home. That was a few hours ago."

She was questioned at the West Side checkpoint after cops noticed her California license plate had expired. A male passenger was in the car, sources said.

Her blood alcohol level was .12, well above the legal limit of .08, court papers show.

The aspiring filmmaker was hit with a slew of charges, including driving while intoxicated and driving while ability impaired by the combined influence of drugs and alcohol, prosecutors said.

She didn't say a word as a judge ordered her released without bail.

Outside the courthouse, Pacino, who had her license suspended, ignored reporters' questions.

"She doesn't have anything to say right now," her lawyer, Bruce Kage, said.

Pacino's mother, Jan Tarrant, was her famous dad's acting coach. In 2009, Julie Pacino wrote and directed a film called "Abracadabra." She is currently working on a movie called, "Billy Bates."

A representative for Al Pacino said he was not immediately available for comment.
Posted by joe levin at 9:36 PM