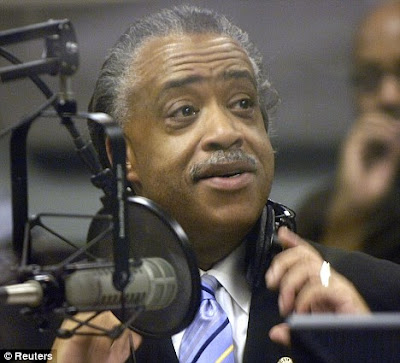 He’s the controversial civil rights campaigner whose colourful past includes accusations of bigotry, racism and anti-Semitism.

Now cable news network MSNBC is reportedly handing Reverend Al Sharpton the 6pm primetime slot in a move bound to cause a storm.

Rev Sharpton, 56, has been guest hosting the slot for three weeks, after radio host Cenk Uygur had a six-month try-out that failed.

The former Democratic presidential candidate is set to become the only black host of a U.S. primetime cable news show.

Sharpton's profile rose in the late 1980s when 15-year-old Tawana Brawley was discovered sitting in a bin bag outside a New York flat.

She claimed to have been raped by a group of white men in a racist attack and Rev Sharpton hit out at her alleged rapists - but doctors found no physical rape evidence.

A grand jury decided not to press charges and the court decided that she had made up her story - but Rev Sharpton still believes her.

Mr Uygur was given the slot and his ratings were solid but failed to satisfy the channel’s president, Phil Griffin, who decided to give Rev Sharpton a try-out.

Mr Uygur said he turned down a new contract including a weekend show because he thought Mr Griffin had come under political pressure.

He believed he had upset White House officials - and was seen as the fiercest MSNBC host who criticises President Obama and Democrats.

Mr Uygur claimed Mr Griffin told him MSNBC was part of the 'establishment' and 'you need to act like it'.

Mr Griffin denied he had fallen to political pressure. ‘We never told Cenk what to say or what not to say,’ he told the New York Times.

But he explained producers found Mr Uygur’s aggressive body language and demeanour were making it tougher to book guests.

‘I didn’t agree with everything said on the show,’ White House communications director Dan Pfeiffer told the New York Times.

‘But (I) certainly didn’t have any problem with it.’
Other controversial and unsuccessful MSNBC hosts include Jesse Ventura and Michael Savage.

Mr Savage was fired for his on-air comments suggesting gay people should die of Aids.
Posted by joe levin at 7:07 PM