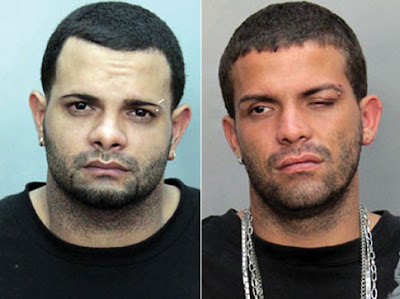 Flight attendants were unable to rouse him and suspected he was extremely intoxicated, forcing the pilot to stop taxiing and return to the airport.

When Baez finally came to, the brothers were informed they were being kicked off the plane. As Jonathan staggered down the aisle with his brother, witnesses said, the two began swearing at the pilot and flight attendants.

"When you fly to San Juan, I will have you killed," one of the brothers yelled at the pilot, according to police.

The belligerent brothers finally exited the plane, but Jonathan then turned around and rushed the pilot, punching him in the face, cops said. When a female attendant tried to step in, he socked her as well, police said.

His brother jumped in and the two thugs repeatedly struck the pilot, who managed to escape and run into the terminal, according to a police report. The brothers gave chase, but were tackled and restrained by passengers and crew, according to the report.

The pilot was left bruised and bloody, one witness told KTVU in San Francisco.