Marty trips up over his 'first lady' 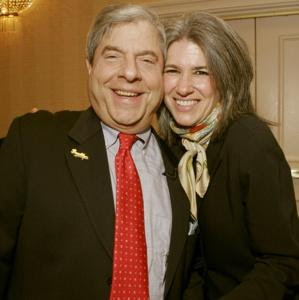 Brooklyn Borough President Marty Markowitz was fined a stinging $20,000 yesterday for taking his wife on two freebie foreign trips -- and he tried to justify the travel by claiming that the "first lady of Brooklyn" should be viewed in the same league as the nation's globe-trotting first lady, Michelle Obama.

The audacious claim was shot down by city ethics officials.

"The comparison is inapt," scoffed Administrative Law Judge Kevin Casey, who recommended the stiff penalty that was later imposed by the Conflicts of Interest Board, the city's ethics panel

"Historically, the nation's first ladies have been subject to intense public scrutiny. Recent first ladies are household names to most Americans, they are internationally recognized figures, and they have a full-time staff. There is simply no meaningful comparison between the role of the first lady of the United States and the first lady of Brooklyn."

Markowitz found himself in his latest ethics jam after voluntarily disclosing in annual financial filings that he and his wife, Jamie, had traveled together to Holland and Turkey in 2009 as guests of those governments. The value of the two trips was estimated between $10,000 and $40,000.

Though he agreed to pay the $20,000 fine, Markowitz was furious at what he called a "crazy" decision.

"If I get any more trips, I'm not going without my wife," he fumed.

"I'm not a dummy. I understand what a conflict is . . . I didn't abuse my position. They believe my wife doesn't have any role and they're wrong. You go to Europe, other countries, being Brooklyn borough president is a big thing there.

"Some people get in trouble when they don't take their wives. I'm getting in trouble because I took my wife."

Ethics watchdogs had no problem with Markowitz joining a delegation to Holland to celebrate the 400th anniversary of Henry Hudson's voyage to New York. They also had no issue with Markowitz jetting to Turkey the same year to develop a sister-city relationship with the city of Izmir.

But they had a big problem when Jamie tagged along.

"By accepting travel expenses for his wife for each trip, respondent used his position as a public servant for a private or personal advantage," Casey concluded. "Simply put, his wife was able to travel with him abroad -- for free."

Casey rejected the Beep's claim that the rules about spouses accompanying elected officials on such trips are fuzzy.

Markowitz himself inquired about the rules in April 2007, when the Queen Mary 2 was inaugurating service from Brooklyn and he and his wife were offered free passage by Cunard Lines to England. Advised that she should pay her own way, he quickly agreed.

In August 2007, Markowitz was again in touch with the Conflicts of Interest Board, this time to say he had been invited to Turkey to "promote Brooklyn tourism and improve relations between Turkey and Brooklyn."

"As indicated by the COIB for my trip in May 2007 on the Queen Mary 2, I will pay for my wife's airfare, our meals and incidental expenses while in Turkey," Markowitz said at the time.

It turned out that during the 2007 trip to Turkey, Jamie Markowitz accepted a free flight within Turkey that she valued at $200. For that violation, the ethics board slapped him with a $3,000 fine.

The board penalized Markowitz another $7,000 for the Holland trip and $10,000 for the second jaunt to Turkey, both in 2009, both of which included free travel for his wife.
Posted by joe levin at 7:37 AM