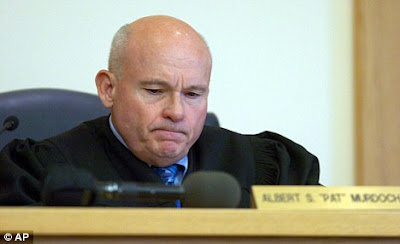 A senior judge has been arrested on rape charges after his alleged victim secretly filmed him carrying out the attack.

Judge Albert Murdoch was also allegedly caught on the hidden tape boasting that he was above the law and would use his police contacts to make any charges go away.

His arrest has led to authorities in New Mexico to look into many of the cases he presided over during a 25-year career.

Murdoch, a 59-year-old criminal judge for the Second Judicial District Court in Bernalillo County in Albuquerque, was arrested on rape charges based on the hidden tape.

Police said a prostitute hired on at least eight occasions by Murdoch set up the camera when she visited his home.

She had previously claimed she had been forced to take part in sex acts against her will and wanted to gather evidence.

The woman is heard hinting about the possibility of someone making allegations against him and Murdoch allegedly telling her he would use the police and his connections to take care of the situation.

The secretly recorded film came to the attention of police in Albuquerque following a tip off to the vice squad in the city.

Anytime, anybody, it doesn't matter whether it's a prostitute or if it was anybody whatsoever. If somebody says something is unwanted at that moment, that behaviour and those actions need to stop,' said Albuquerque Police Deputy Chief Paul Feist.

The prostitute said she first met Murdoch when he responded to an advert she had placed online and paid her $200 for sex.

Murdoch is the chief criminal judge for Albuquerque and has a reputation for handing out tough sentences.

In an interview for a legal magazine he said he was inspired to go into law after watching the film To Kill and Mockingbird which featured the lawyer Atticus Finch.

Murdoch has been charged with rape and witness intimidation.
He was released on $50,000 bond.