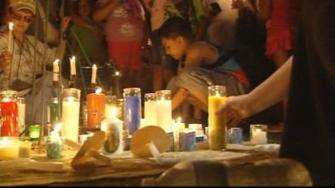 Each one touched by the life and death of 8-year-old Leiby Kletzsky, using candles to show the light he left in their hearts and minds.

"It must be very painful for the community it's so close to home and it's a child that didn't know any better and didn't have anyone to help him," Bay Ridge resident Catherine Greco said.

The 8-year-old was walking home from his Borough Park day camp July 11th.

He was kidnapped, drugged, smothered and dismembered, alledgely at the hands of 35-year-old Levi Aron.

His death opened up a difficult but necessary conversation for parents like Barbara Lang and her 8-year-old son Jakob.

I have an eight-year-old. I don't know what to feel. It's devastating," Kensington resident Barbara Lang said.

Mourners signed a banner on the sidewalk expressing their thoughts and prayers for Leiby and his family.

It's a way to cope with this tragedy but in no way a step closer to understanding how someone, anyone could do such a terrible thing to an innocent boy.

I just want to say to his parents we are with you. We hope he rests in peace," vigil attendee Iram Ali said.

Leiby's father is asking a memorial fund in their son's memory.

The goal is $1,000,000 to help people in need and to do at least some of what Leiby would have accomplished in his lifetime.