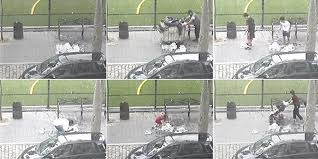 At first glance, the guy in the white polo shirt and khaki pants looks like anybody else walking down Broadway.

He's looking forward. He walks with purpose. Now, he's stopping to answer his phone. But a closer look reveals something unsettling: The slightly distorted image is actually me.

I was captured walking to work this week by a surveillance camera perched outside the Cozy Soup N' Burger, a diner near Astor Place. It's a route I've taken countless times before, but never had I noticed the two cameras trained on the sidewalk outside.

It turns out those cameras are far from alone. On my typical route to work, encompassing just four blocks from my apartment to the nearest subway station, I come under the unblinking eyes of a staggering 15 surveillance cameras.

It's not only Big Brother who is watching.

These days, cameras peer out from everything from bodegas to restaurants to traffic poles.

"Surveillance cameras are now a part of our way of life," said Mitchell Moss, a city expert and director of NYU's Rudin Center for Transportation Policy and Management. "Cameras have become the way to manage the public spaces of our city."

The benefits of cameras came into focus in dramatic fashion this month when surveillance footage led to the capture of the suspected killer of Leiby Kletzky, the 8-year-old Brooklyn boy who was found dead and dismembered.

In 2006, the New York Civil Liberties Union launched an effort to tally the number of surveillance cameras. But the search was called off after staffers counted 8,000 between the base of Manhattan and 14th St.

"We realized they had become too numerous for us to count," said executive director Donna Lieberman.

The vast majority were put in place in the wake of the 9/11 attacks, experts say. In the years since, they have become crucial law enforcement tools - but the proliferation of cameras in the city is not universally supported.

Lieberman points out there are still scant procedures in place to monitor those who are responsible for handling the endless amounts of footage. "People don't expect and shouldn't have to expect that there's going to be a permanent record of every step they take, every smooch they give to a lover, every kind of bar or restaurant they walk into," Lieberman said. "The possibilities of abuse are just mind-boggling."

I'm probably better off adopting the "ignorance is bliss" mentality.

For my first 40 paces, from my front door to the edge of my lobby, I'm untraceable. The moment I take that 41st step, however, the gig is up: I'm in full view of a surveillance camera perched just inside my apartment building.

A block away, on Washington Place between Mercer St. and Broadway, there are two surveillance cameras outside two adjacent nondescript doors. After I cross to the east side of Broadway, I walk in view of two cameras perched outside the NYU Bookstore at 726 Broadway. About 40 feet north, there are two more cameras outside 730 Broadway, an NYU building housing the student health center. Two additional cameras hang outside the building's second entrance about 30 feet away.

On a typical week, I stop by a nearby Bank of America ATM at least twice. A surveillance camera captures me walking inside. After that brief stop, I cross to the west side of Broadway and almost immediately walk into view of two cameras outside the Cozy diner.

Since the cameras were installed in 2008, they have helped cops nab muggers and enabled staffers to identify diners who fled without paying the bill, Cozy's manager said.

"It's a must," said manager Demetrios Benetos. "Thank God for the camera system."

From Cozy, I walk just a few more feet to the Eighth St. subway station. A camera catches me walking through the turnstiles. Two more record me strolling along the platform. The downtown R train arrives a few minutes later, and I step inside.

Finally, I can rest assured that my movements are not being tracked - that is, as long as no one pulls out a cell phone, digital camera or camcorder.
Posted by joe levin at 7:37 AM

Email ThisBlogThis!Share to TwitterShare to FacebookShare to Pinterest
Labels: nydailynews.com