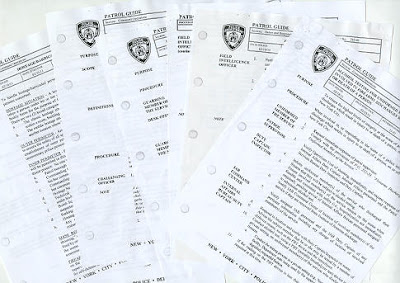 Portions of an NYPD patrol guide were plucked from a trash can outside a midtown NYPD building - the same bin where counterterrorism paperwork was found in May.

For the second time this year, blogger Bucky Turco walked by the Manhattan South Task Force on W. 42nd St. and found a stack of police documents sitting in a city trash bin outside the building, he said.

"They were just right there," said Turco, who planned to post some of the documents today on animalnewyork.com. "They were in perfect condition."

The 12-page packet - which was obtained by the Daily News - outlines basic NYPD procedures that include how to safely resolve confrontations among officers and how to deal with hostage situations.

It also details protocol to test officers for alcohol after a cop fires a gun and injures or kills a person.

The paperwork, dated Feb. 18, includes a summary of duties for a field intelligence officer, who is responsible for gathering and sharing information with several departments.

Although the papers found Monday night are NYPD documents, much of the information can be found online.

"This time it wasn't anything confidential . . . but what if one day it is?" Turco asked. "Obviously, the last time didn't get through to anyone."

In May, Turco found an eight-page plan labeled "law enforcement sensitive" - a small part of the city's counterterrorism plans - in the same trash can.

The paperwork detailed locations in Times Square where anti-terror cops were deployed to conduct sweeps. It also listed the types of suspicious behavior cops should be looking for when inspecting vehicles.

Paul Browne, the top spokesman for the NYPD, said the officers working at the building should take more care in discarding documents.

"While none of the documents appear to be sensitive, the command should ensure they're shredded," Browne said, "especially since someone with a lot of time on his hands is going through the garbage there."

"I don't make it a business of diving through trash," he said, adding that the documents weren't that deep in the trash bin.

Turco said he's concerned that one day someone will walk by to find confidential police information tossed in the bin.

"Maybe they should invest in a shredder," he said. "We spend all this money on this high-tech equipment . . . and they don't even take their trash inside the precinct? This is a sensitive area - it's Times Square."
Posted by joe levin at 6:02 AM