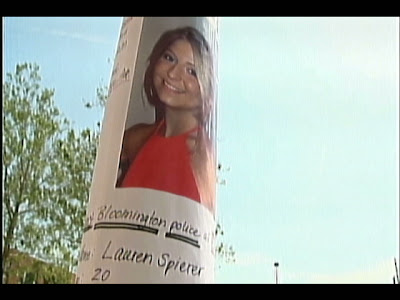 BLOOMINGTON, Ind. — The boyfriend of missing college student Lauren Spierer spoke with detectives this week and has taken a lie-detector test, he confirmed Friday in a Facebook exchange with a reporter from The Journal News.

And he suggested he passed the polygraph.

"If I failed a polygraph everyone in the world would know," read a message written from Jesse Wolff's Facebook account.

These were Wolff's first public comments since police identified him early in the investigation as one of the "persons of interest."

He also said "my life (expletive ) sucks," in response to questions about the disappearance, search and investigation that has now been going on for 50 days.

Wolff, a resident of Port Washington, Long Island, who graduated this year from Indiana University, told friends that he had planned to get together with Spierer early on June 3, but they couldn't reach each other that morning because, as he learned later, she'd left her cellphone at a bar.

He was the person bar employees called later in the morning to report they had her phone, after seeing several text exchanges between the couple.

Wolff's main Facebook photo, undated, shows him and Spierer — a 20-year-old from Greenburgh — with their arms around each other, both smiling. The two met as teens at a Jewish summer camp in Pennsylvania and started dating seriously after she enrolled at I.U. in 2009.

A couple of weeks ago, police in Bloomington, Ind., searched the home that Wolff shared with former fraternity brothers.

Since Spierer's disappearance, a reporter for The Journal News has sent repeated emails to Wolff and visited his home on Thursday, seeking an interview. His parents declined to comment, threatening to unleash their poodle if the reporter didn't leave immediately.

Wolff responded Friday via Facebook, urging the reporter to "Leave me alone please." He then stated, "I spoke with the detectives Tuesday and have taken a polygraph. All my cards are out on the table ..."

Asked whether police administered the polygraph, and for the results, Wolff replied, "What the (expletive) do you think the results were? if i (sic) failed a polygraph everyone in the world would know ..."

Asked again whether police administered the test, he replied, "I don't think you are understanding what i (sic) just said to you ... dont (sic) ever talk to me again."

He also declined to share details of his interactions with Spierer in the hours before she went missing.

"(Expletive) you and (expletive) the media," he wrote. "I tell the police everything because they can actually help."

Neither police nor his lawyer responded to calls seeking comment.

Meanwhile, Spierer's mother released a new statement Friday, 50 days since her daughter's disappearance. She wrote of the "indescribable" heartbreak that she and her family continue to experience.

"It's as if our lives before June 3rd never happened," Charlene Spierer wrote. "We are suspended in time. I cannot imagine doing anything other than searching for Lauren until the time we find her and can take her home with us. .... Every day you think this could be the day and every day I believe that with all my heart."

She and her husband, Robert, remain in Bloomington.

She spoke of the tremendous support her family has received, but also restated her anger over individuals who are holding back information. In the past, she has chastised friends who were with her daughter that night and morning. In the new letter, she wrote of "evil, a cruel heartless element that cares more about themselves than the life of my daughter."

Addressing no one by name, she urged anyone who is withholding information to come forward.

"Your silence is deafening," she wrote. "Your lack of compassion is (reprehensible). Your lack of respect for another human being which allows you to go day, by day, watching is unimaginable. Everyone is put on this Earth for a purpose. Everyone has a defining moment. In the blink of an eye Lauren disappeared. Do not let this be your defining moment. You have no idea what you have taken from us.

"My promise to you, we will not rest until we find Lauren," she continued. "What are you waiting for? You can still do the right thing."
Posted by joe levin at 10:00 PM