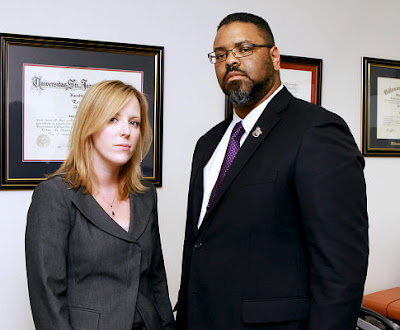 A former NYPD cop and a young overachiever with a total of only eight years' experience as lawyers are set to defend the city's most despised killer.

The young legal eagles are gearing up for the case of their lives as accused killer Levi Aron is set to appear in Brooklyn Supreme Court Thursday on murder charges for snatching and butchering little Leiby Kletzky.

Aron is accused of murdering the lost 8-year-old three weeks ago, a monstrous crime to which he reportedly confessed. The boy's feet were found in his freezer, and the rest of the carved-up body inside a Dumpster.

The other half of the team, lawyer Pierre Bazile, said the suspect's family asked him to represent Aron. He brought McCann along after his associate Gerard Marrone stepped down.

"I'm taking this case because a family asked me for help," Bazile said. "If you want to be an attorney, you treat the client that's in front of you."

In an hour-long interview with the Daily News, the two Long Island-based lawyers would not directly discuss Aron or divulge how much they're getting paid. Both vowed to see the case through to the end.

They were both admitted to the bar in 2007. Bazile, 40, retired after a 14-year career as a police officer. The 30-year-old McCann graduated from St. John's School of Law on a scholarship.

An earnest Michigan native, she's often mistaken for a paralegal. More than once, she said, when filing court documents, she has been told, "Honey, wait for the lawyer to get here."

McCann has handled a number of murder and other high-profile cases, but the publicity, attention and death threats this case has generated are new for both lawyers.

"It's completely foreign. It's distracting," Bazile said of the media glare. "It's been a little overwhelming."

The lawyers will be pitted against experienced and aggressive prosecutors. District Attorney Charles Hynes has called the murder the most horrific homicide of his 20-year tenure and vowed to seek the maximum penalty of life without parole.

Justice Neil Firetog, who will hear the case, is known as particularly tough on defense lawyers, even fining those who cross him.

Bazile and McCann say they are ready for whatever comes along. "We were able to come up with a very detailed and unique plan," McCann said.

The results of Aron's psychiatric exams are expected to be revealed this week. His defense team intends to have their experts determine if an insanity defense is viable.

They are also expected to ask for a change of venue, arguing the jury pool has been tainted, The News has learned.

Bazile, who claimed at the arraignment that his 35-year-old client hears voices, said he can't believe anyone would commit such a depraved crime "absent some sort of derangement."

The lawyers said they also hope Aron's mental state and a desire to shield Leiby's family from the gory details will persuade prosecutors to consider a deal down the road.
Posted by joe levin at 7:21 AM