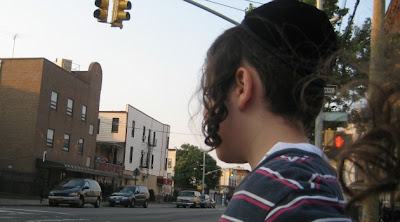 What’s It Like To Be A Boy in Boro Park?

For a blue-eyed 13-year-old named Yochanan, the lure of sleep-away camp this year is a religious ceremony at summer’s end. Yochanan will have a small bar mitzvah there in August, reading from the Torah in front of his bunkmates for the first time. A second, more formal ceremony will take place in September, in Brooklyn’s Boro Park.

On a bright and sunny Sunday afternoon, this meant a smaller milestone to herald the larger one: His mother, Chavie Landman, brought Yochanan and his 9-year-old sister, Chaya, to Bencraft Hatters on Boro Park’s 13th Avenue to buy a black, wide-brimmed Borselino brand hat that he will wear during his summer camp bar mitzvah. (Landman asked the Forward to use her maiden name in identifying her out of a wish to avoid publicity.)

The excursion occurred on July 17, just six days after another child was abducted and killed on a nearby street. And the shock still echoed in the conversations of people on the busy sidewalks. But inside

the store, a salesman calmly asked, “First hat?” picking up a Borselino for Yochanan to try on. Three hats later, Yochanan considered himself in the mirror. His mother agreed: This was the one.

For Yochanan, this summer will culminate a childhood of striking structure and regimen — a disciplined coming of age that begins even before a child learns how to cross the street and walk home from day camp by himself, as 8-year-old Leiby Kletzky was trying to do for the first time when he was snatched from his neighborhood. A Jewish man is accused of abducting and killing him, and is currently awaiting trial. Meanwhile, a community that exists to groom the next generation of Orthodox Jews continues to pursue its core purpose with, if anything, renewed intensity.

To be an 8-year-old boy in Boro Park is to submit to a highly structured life of school and prayer. The secular notion of helicopter parenting — in which mothers and fathers hover protectively over their children — does not exist in Boro Park. It might be said that there is no need for helicopters in that neighborhood; the community watches its own, accounting for both the safety and spiritual trajectory of each boy and girl. Leiby Kletzky’s anomalous death revealed the inevitable gaps that persist even in a community determined to maintain wall-to-wall vigilance over its young.

Orthodox parents in Boro Park typically have at least five children, making it one of the fastest-growing neighborhoods in New York. The most recent hard data on the community’s Jewish population is a UJA-Federation Jewish population survey that found 76,600 Jews living in Boro Park in 2002 — a number certain to have grown substantially since then.

It is a community whose focus on children is defined by yeshiva. For boys, school begins at the age of 3 or 3.5, when they receive their first haircuts, complete with payess, or sidelocks, and don their first tallitot katan, the undergarments with tzit-tzit, or prayer fringes, that traditionally observant Jewish males wear. They enter a sex-segregated school system that will prepare them, first and foremost, to live Jewishly, as they define it.

In Boro Park, Jewish education means study of Torah and Talmud as holy texts. There are dozens of different types of yeshivas in Boro Park. Some are affiliated with particular sects of Hasidism, and others are open to all types of Orthodox Jews. Depending on the yeshiva, religious lessons are taught either in biblical Hebrew or in Yiddish. This takes up the morning, starting at 9 a.m. The latter half of the day is spent learning secular subjects in English, such as math or history. Praying, eating and playing are all folded neatly into the school day.

The number of hours a child spends in school correlates with his age. For an 8-year-old in Boro Park, the school day will end at 5 p.m. or 6 p.m. A boy training to become a bar mitzvah might spend two nights a week studying until 7 p.m. The oldest boys go till midnight. Girls, who attend separate schools, have shorter days, returning home to help their mothers cook and clean. They don’t have bat mitzvahs.

A yeshiva education in Boro Park costs parents about $400 per child per month, according to Friedlander. “With six or seven children, the bulk of the income goes toward providing children with a Jewish education,” he said.

Boro Park children spend most of their waking hours at school, but their home lives are no less regimented. Very few families in Boro Park have a television; in fact, Leiby Kletzky may have watched a rare TV show at his accused killer’s apartment hours before his own death. Some families keep computers in their homes for business purposes, but parents lock them away in home offices when not in use. Because of this, Boro Park kids have little understanding of the pop culture that saturates the lives of their secular counterparts. Many young boys play base cball or basketball. But some of the most strictly observant may have no clue who Derek Jeter or LeBron James is.

In summertime, the streets of Boro Park are alternately quiet or clamorous, depending on where the kids are. Most children spend several weeks of the summer at sleep-away camps in the Catskills. Others attend religious day camps that include several hours of study, but also trips to the zoo or to the ice skating rink.

Some Orthodox leaders have questioned the value of the lax summertime schedule, calling it a waste of an opportunity to further the children’s religious education. On July 17, outside Etzee’s Kids clothing store on 13th Avenue, a woman was handing out a publication about the Messiah. It included an article that admonished, “There is no taking a vacation from Torah study.”

But even a life so highly focused on religion generates commerce and its amiable companions, window shopping and street life. Elsewhere on the busy avenue, rows of stores cater to the community’s Orthodox lifestyle: wig stores for married women, Judaica stores brimming with candle sticks and prayer books, and kosher ice cream shops. The children’s clothing boutiques — which seem to occupy every third building — are the most riotous of the stores. Racks overflowing with discount garments crowd the sidewalks: shin-length black skirts and long-sleeve shirts for the girls, and button-down white shirts and black slacks for the boys. Canvas signs advertise the goods inside: “Fine children’s wear for Shabbos, weekday, camp wear.”

Inside Bencraft Hatters, the salesman picked up the hat now meant for Yochanan and held it between his fists as if showing a driving student how to place his hands on the steering wheel: “Whenever you put it on, make sure to roll down the brim. Think 10:00 to 3:00.” Yochanan put it back on his head.

“You are not the smallest guy, but you are not the biggest guy,” the salesman said. “You are going to grow a lot.”
Posted by joe levin at 9:52 AM

Email ThisBlogThis!Share to TwitterShare to FacebookShare to Pinterest
Labels: By Josh Nathan-Kazis and Naomi Zeveloff - forward.com