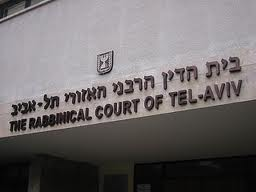 In a rare move, the Jerusalem Rabbinical Court ordered a 59-year-old woman jailed this week for refusing for 15 years to accept a ritual divorce from her husband and release him from their marriage.

Disputes over refusals to grant a get, or Jewish religious separation, are common, but usually involve a husband holding back the bill of divorce, making this a rare case.

The woman, who lives in the center of the country, is refusing to accept the divorce from her husband because of an ongoing property dispute between the two.

“I won’t take the get under any circumstances, even if they take me to jail,” the woman told Haaretz Monday. “I’m made of steel, you can’t break me.”

The rabbinical court took the step after imposing a series of sanctions on her, in an effort to force her to accept the divorce. But after these efforts failed, the court, comprising rabbis Avraham Sheinfeld, Eliyahu Abergil and Mordechai Toledano, ordered her imprisoned for 30 days.

While under Jewish law the power to divorce rests with the husband, a man cannot divorce his wife against her will. This leaves the wife some leverage, as she must accept the divorce for it to be valid.

The couple married in 1987, three months before their only child, a boy, was born. It was the second marriage for both. In 1996, the husband filed for divorce with the local rabbinate and at the end of that year the rabbinical court ordered her to accept a divorce, but she refused.

The woman conditioned her acceptance of the divorce on her getting a home they owned in the center of the country and $1.5 million. The woman claimed that by this she was abandoning her claim to other, substantial property her husband owned, including a profitable business.

The husband claimed that she had gotten her share of their property under the receivership law, and that she was blackmailing him by withholding the divorce, which keeps him from being able to remarry by Jewish law.

To force her to accept the divorce, the rabbinical court blocked her from leaving the country, restricted her bank account and suspended her driver’s license. But the woman remained firm.

In 2001 the rabbinical court even granted the husband permission to marry again, another relative rarity. But his attorney, Shmuel Gross, noted that the Interior Ministry will not “unlink” the woman from her husband without a ritual divorce, and that as far as it’s concerned, the two are still married.

Attorney Irit Rosenblum, who heads the New Family organization, has appealed to the ministry on the husband’s behalf, asking it to change the man’s status from “married” to “under clarification.”

She noted that whatever the status of their personal relationship, having the woman listed as his wife has ramifications relating to pension rights and inheritance, the Tax Authority, the National Insurance Institute and the health funds.

Batia Kahana-Dror, who heads the organization Mevoi Satum, which helps and advocates for women being denied a divorce, said she had never heard of a woman being jailed for refusing to accept a get. Nevertheless, she backed the court’s action.

“A get should not be a blackmailing tool for a man or a woman,” she said.
Posted by joe levin at 5:14 AM