Pinches Surkis with a girl 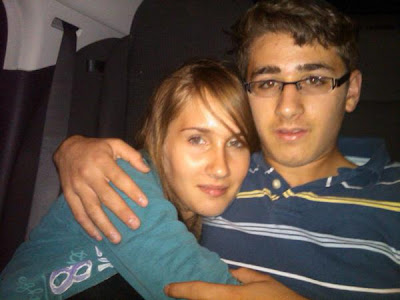 RAMAPO — A New Square 17-year-old has been accused of robbing two women he picked up under the guise of hiring them to clean his house, and of trying to sexually abuse one of them.

In both cases, Surkis picked up a woman walking on the street and drove her around or to a specific location before asking her for sex, Lynch said. The women were Hispanic and cleaned houses for a living. They were walking either to or from their jobs, he said.

On Nov. 10, Surkis drove a woman to Wesley Hills Park on Willow Tree Road, Lynch said. He tried to have her perform oral sex, and when she refused, he forcibly took her pocketbook, stealing her cellphone, police said. She left the car, and he drove off.

On Dec. 20, Surkis picked up a 32-year-old woman walking on Maple Avenue near Monsey Boulevard, police said. As he drove her around, he solicited sex from her, police said. When she refused, he grabbed her pocketbook, police said. She was able to get out of the car on Hempstead Road at Brick Church Road, where she got help and the police were called, Lynch said.

“His motivation was to steal their money,” Lynch said.

Surkis, who lives on Bush Lane in New Square, was arrested Wednesday after an investigation by Ramapo police detectives. He was arraigned on two counts of third-degree robbery and one count of third-degree attempted sexual abuse by Ramapo Justice Rhoda Schoenberger.

Schoenberger set Surkis’s bail at $50,000 and sent him to the county jail in New City, where he remained Friday.

Lynch said detectives were investigating several similar incidents, though the descriptions of the main suspect in those cases don’t match Surkis.

Lynch said detectives have not ruled out Surkis being involved.

Sirkus is accused of picking up two women in the town of Ramapo between Nov. 10 and Dec. 20. It is believed Sirkus approached the women in his car, offered them work as house cleaners and then asked them for sex once they had accepted his proposal and entered the car. When the women refused, Sirkus is said to have robbed each of their pocketbook before letting them out of the car.
Posted by joe levin at 11:51 AM