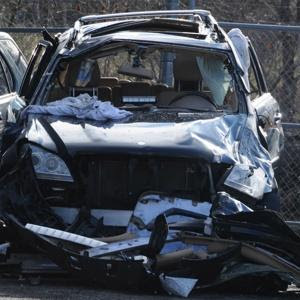 ROLLOVER AND OVER: This is what’s left of the Mercedes SUV, carrying Eli Rowe (below) and his family, that rolled over several times on a slick road yesterday upstate 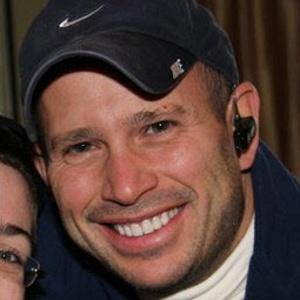 A veteran Hatzolah Paramedic from NY traveling with his family has been involved in a serious collision on the New York State Thruway, in Upstate New York.

The vehicle reportedly overturned on the Interstate 87 near Exit 21, around 2:00AM, Friday morning. One of his children was R”L ejected from the vehicle.

The family of seven, were all transported to Albany Medical Center with various injuries.

Although his entire family was hospitalized after the early-morning wreck yesterday near the town of Bethlehem, 42-year-old dad Eli Rowe sounded grateful that things didn’t turn out worse.

He said their 2010 Mercedes veered off the rain-soaked New York Thruway and flipped over multiple times as they were headed from Flushing to Lake George for a family getaway.

Yet somehow the vehicle, driven by Rowe’s 17-year-old son, Max, landed upright on a patch of grass near the roadway’s shoulder.

“Considering five people were admitted to the hospital and none with critical injuries, it is a holiday miracle,” said Rowe, a volunteer paramedic with the Queens Hatzolah who tended to his family before emergency responders arrived. “I think it’s beyond miraculous.”

Rowe’s youngest son, 7-year-old Shlomo, was the most seriously hurt. He ruptured his liver and spleen after being tossed from the back seat of the rolling car.

Rowe’s wife, Chedva, who had been sitting up front, their two other children and Max were also hospitalized at the Albany Medical Center, all in stable condition.

“They’re hopeful for their son’s survival,” Rabbi Abe Friedman, a Brooklyn chaplain who consoled the family yesterday, said of Shlomo, whose condition had improved by late yesterday.

“They don’t know what triggered it,” Friedman said of the 1:46 a.m. wreck. “The car rolled several times. They were traumatized and can hardly remember what happened.”

Cops said Max Rowe was issued citations for not having his younger brother properly restrained in a child seat and for driving with “imprudent speed” considering the downpour.

Their Flushing neighbors were shocked to learn about the near-catastrophe but hailed the family’s relatively good fortune — particularly given the holiday season.

“If it was a serious accident, it is pretty miraculous, especially this time of year,” said Moisey Rafailov, a 20-year-old student.

Others noted that Eli Rowe is a fixture in the community and someone whose good works and generosity deserve to come back to his family in kind.

Rowe is a pilot who owns two planes and eagerly volunteered to provide medical help to victims of last year’s horrific earthquake in Haiti, they said.

He’s also affiliated with several nonprofits that host camps for sick children, according to online postings.

“When someone is in trouble, he’s the first one on the scene. Middle of the night, middle of the day, Sabbath doesn’t matter,” said neighbor Bob Lindenbaum, 58. “He really heads the whole community.”

Rowe reserved his praise for the Albany County Sheriff’s Office and the rapid first responders who helped his family.
Posted by joe levin at 8:35 AM