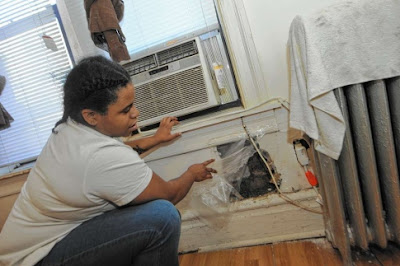 Those are some of the many conditions trying the patience of tenants living in bad-news buildings that made Public Advocate Bill de Blasio’s third annual list of nightmare rentals and landlords.

The watch list includes 358 buildings owned by a total of 317 landlords.

“There have to be consequences for bad actors that walk away from their most basic responsibilities to tenants,” de Blasio said, noting the purpose of the list is to shame landlords into improving conditions.

The building with the most violations is in Brooklyn — 245 Sullivan Place in Crown Heights.

Tenants at the 40-unit complex say they’re sharing their homes with roaches and rats, and struggling to live with crumbling ceilings and exposed wiring. Some apartments lack either electricity, hot water or heat, or a mix of all three. City records show the building has 654 open violations.

“The building was basically abandoned,” said tenant Lavelle Bert, 35, a telecommunications worker. “We have mold, our floor was flooded, and the electricity only works in certain places. It’s frustrating to live like this.”

He also had a gaping hole in his bathroom ceiling and had to have it fixed. “We called it our skylight,” he joked, wishing it were funny.

A woman who answered the door at his home in Queens Village said he’s elderly and in ill health.

“All of those things (problems in the building) are being taken care of,” she vowed.

Josh Neustein, owner of 1071 Home Corp., was rated the worst landlord in the city.

The self-made real estate big owns eight buildings on the watch list. The buildings, in upper Manhattan and the Bronx, have racked up 1,187 hazardous violations.

“We have decent tenants, we give good service and we take care of any repairs that have to be done,” Neustein told the Daily News in April. He did not return a call seeking comment Monday.

Many landlords who made the list have called to find out how to get off of it, de Blasio says. In all, 176 buildings have been taken off the roster after fixes were made.

Others have blamed their residents, housing advocates said.

That includes the owner of 41-45 Elliott Place in Mount Eden, the Bronx.

This month, management called the police during a recent tenant meeting in the apartment complex’s lobby. Aided by community organizers, the tenants tried to talk with the landlord about their multiple grievances.

A manager told the cops they were trespassing and the meeting was broken up, tenants say.

On a tour of the building last week, The News found rusted floors and grime-filled hallways with flickering lights and peeling paint.

“I have rarely seen this kind of harassment when tenants fear for their own safety,” said Susanna Blankley, the lead organizer for Community Action for Safe Apartments.

The building’s super, Henry Martinez, said residents caused the problems by cramming multiple families into small units.
Posted by joe levin at 5:55 AM