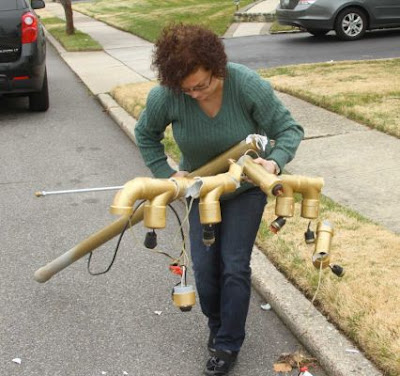 PLAINVIEW - Nassau County police are investigating the destruction of a holiday decoration in Plainview.

Mangled remains are all that's left of a broken menorah that had been given to Burton Radish and his wife as a special holiday gift 10 years ago. It has a lot of sentimental value, but on Monday night, vandals smashed it to pieces.

"Someone had pulled it out of the ground and really impaled it in the ground," Radish said. "They did a job on it."

The gold painted PVC pipes are all that remain of the Hanukkah decoration, traditionally called a Hanukkiah. For Radish, the crime could not have come at a worst time. He had just finished sitting shiva after the passing of his wife Roslee.

The Hanukkiah was given to the couple from the synagogue where she served as past president before she got sick.

The pair was married for 47 years, and now, his personal pain has this added insult.

"It's still a trial and tribulation to get over this loss, and to have this happen to is like a double blow," he said.

Radish's daughter first noticed the destruction and carried many pieces back into the yard. Now the destroyed pieces sit near the shrubs. Radish hopes it can be repaired or replaced, but can't understand why this happened.

"Whoever did this was in a rage for the Hanukkiah and what it represents, Judaism," he said. "Or may have been just drunken kids. I don't know."

Anyone with information is asked to call police.