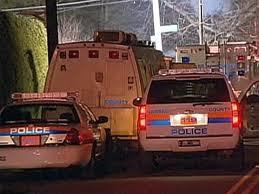 EAST MEADOW - Police are on the scene of a shooting that involved a Nassau County police officer early Friday.

The incident happened around 5:30 a.m. in a parking lot near Hempstead Turnpike in the East Meadow Shopping Plaza.

Authorities say the injured officer was taken to Nassau University Medical Center with a gunshot to the right side.

There's no word if the officer was on duty at the time, and the circumstances are unknown, but it is believed the incident started with a traffic stop.

A suspect is reportedly in custody, but there were reports that he or she was shot and killed at the scene. Police covered a body lying in the parking lot with white sheets. They also cordoned off two vehicles.