It may be a little pricier, but picking a brand you know like Smirnoff could be a smarter choice this New Year’s Eve. 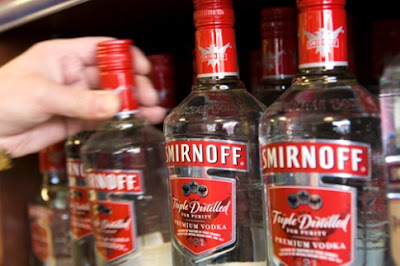 The fake booze popping up in shops recently is so poisonous it could leave partiers blind.

"Everyone wants a bargain, especially at this time of year, but surely the potential health risks far outweigh any financial savings. Purchasing it also does nothing to help legitimate businesses stay afloat," one official told the Telegraph.

Signs of fake vodka include a nailpolish-like odor, weird labels or partially filled bottles, according to the newspaper.

The Surrey County Council issued a warning earlier this month, urging imbibers to stay away from "Drop Vodka", which contains chloroform and may be manufactured by gang members.

"Drop Vodka doesn't actually contain enough alcohol to be legally called vodka. It's not registered which means it hasn't been through the rigorous testing process which all food and drink must go through before they can be sold," Surrey County Council Trading Standards' Steve Playle said in the press release.

While this fake vodka apparently hasn’t leaked into the United States, homemade liquor killed 140 people in India earlier this year, the Guardian reported.
Posted by joe levin at 5:36 PM