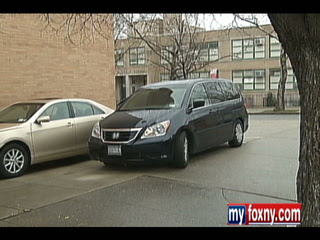 Forest Hills - It's a curb-jumping controversy that has parents in an uproar in Queens. After a third grader was nearly hit by a car driving on a sidewalk, parents want it to stop before it's too late.

On 113th Street and 71st Road in Forest Hills, parents say they have an extra worry every time they take their kids to school at P.S. 196: they are concerned about getting hit by cars driving up onto a sidewalk that is a main route for most of the children and that's also used as a driveway and parking lot by cars from the Touro College Graduate School of Education and the Bnos Malka Academy.

Fox 5 has learned that Touro owns the property and the Malka Academy leases the space.

We witnessed cars driving on the sidewalk 2 days in a row before school started in the morning and after school let out in the afternoon.

"I went to sleep and I told him pray, and thank your lucky stars because it could have been so different," Leung said.

The parents say it's most dangerous during drop-off and pick-up times, when cars compete with school buses and 113th street is congested. The school crossing guard does her best, but can only be in one place at a time.

"I've been doing school crossing for 13 years," she said. "Why is it that some cars are allowed to drive on the sidewalk while children are either walking to or from school? Who allows it?"

That is what frustrated parents want to know, too. They say they called 311, went to the local precinct and tried everything they could, including going to the schools across the street to ask them to be more considerate.

"We were pretty much told it was their property, we should mind our own business and go our separate ways," said Felix Lempert, a concerned parent.

We tried to talk with the academy to see what they had to say, but they refused to speak with us. I did speak with the property manager from Touro College, who insisted the sidewalk parking and driving were in compliance with city codes.

We did some checking around with the city. The Department of Transportation referred us to the NYPD.

The NYPD said it is now aware of the situation and will speak with school authorities to rectify the problem.

"If you look, they're all parked up on the sidewalk and that's what happens," said Dawn Siegel. "They just pull out and don't watch out where the kids are and one of the kids are going to get hurt."

Parents told me that until something is done, they'll try to walk on the other side of the street. The school crossing guard is hoping someone finally pays attention to her concerns for the kids' safety.