FBI Geezer Bandit may not be a geezer

The FBI now thinks the robber, who in one holdup had an oxygen tank with a tube to his nose, may be a younger man wearing a mask and gloves. After the latest of his 16 heists, he sprinted away. 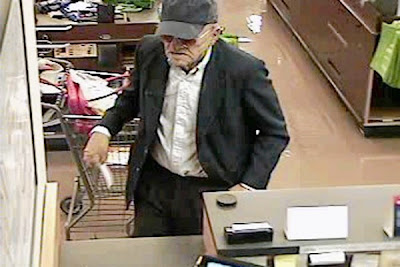 Reporting from San Diego— For more than two years the bank robber dubbed the Geezer Bandit has flummoxed law enforcement, pulling off 16 heists and leaving little evidence behind.

Now the FBI concedes the catchy nickname that the agency bestowed on the bandit — and that helped make him a minor folk hero — may have been a misnomer.

Amateur sleuths, taking their lead from television detective shows, have long surmised that the Geezer Bandit is not a senior between 60 and 70 years old, but a younger man, perhaps wearing a theatrical mask.

But not until this week did the idea that the robber is wearing a disguise go from long-shot possibility to strong probability.

Based on surveillance video and witness interviews at the site of the bandit's latest heist — the Bank of America in San Luis Obispo, hit Dec. 2 — the FBI is now working on the theory that the robber has been faking all along.

A search warrant was served on a costume store in the San Luis Obispo area, demanding a list of all customers who bought a mask known as The Elder.

"The robber was described as someone who appeared to be an elderly white male, but may have been wearing a synthetic-like mask and gloves to conceal his true physical characteristics," the FBI said in a statement Wednesday about the San Luis Obispo robbery.

The statement also reminded the public that a $20,000 reward awaits the person able to provide information leading to the Geezer Bandit's arrest.

Unlike in the 15 previous bank robberies, a quick-thinking teller slipped an exploding dye pack into the plastic bag that the robber used to carry off the loot.

A few steps outside the bank, the pack exploded, spewing red dye all over the robber, the money and possibly his mask and gloves. A surveillance camera shows that the robber "sprinted away across the bank parking lot."

He may have escaped in a white BMW, according to the FBI. In previous robberies, there did not appear to be any good clues about the Geezer Bandit's mode of escape.

If the real robber is found to be wearing a disguise, he would not be the first one to attempt deception to fool surveillance cameras and witnesses. Other robbers have attempted to throw off detectives by posing as people of different ages and genders.

The FBI gives serial robbers nicknames in hopes that media coverage will provide tips from the public. Sometimes the nicknames seem to mock the robbers. Hence the B.O. Bandit and the Beer Belly Bandit.

The Geezer Bandit began his string of heists in August 2009 in the San Diego suburb of Santee. Of his 16 robberies, 11 have been in San Diego County; the others were in Temecula, Bakersfield, Goleta, Morro Bay and San Luis Obispo.

Eight of the 16 took place on Fridays. During one early holdup, the robber appeared with a small oxygen tank on his back and a tube leading to a nosepiece. In all but one of the 16, he wore a hat; in his hatless robbery, he appeared bald.

Still, the FBI warns that the Geezer Bandit — be he true senior or poseur — has repeatedly flashed a gun during his robberies and threatened to shoot any teller who does not give him money.