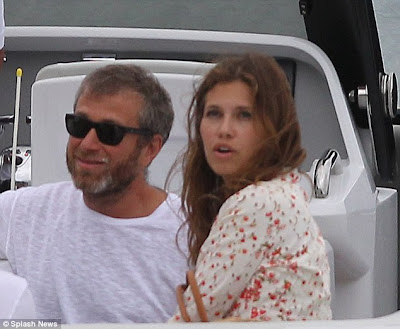 The jet-set crowd is already in a tizzy about attending Russian billionaire Roman Abramovich’s exclusive hot-ticket New Year’s Eve bash at his $90 million estate on the lush hillside of Gouverneur Beach in St. Barts.

We’ve learned the oligarch has booked the Red Hot Chili Peppers to play for 300 guests at the party scheduled to rage from 10 p.m. to 4 a.m. and to include drinks, a buffet and DJ. Guests were informed to dress “island chic.”

“Everyone on the island is going to try to be at the party,” a source said. “The list gets tighter every year.”

Guests are checked in by a woman who sits at a desk at the marina where the stars arrive on their luxury yachts. A source tells us the routine involves “a girl sitting at the port with a laptop on her desk where the yachts pull up, telling people if their name was on the list. All of these people were freaking out about if they were on the list or not.”

Over in Courchevel in the French Alps, New York Nets owner and now Russian presidential candidate Mikhail Prokhorov has been making his presence felt. Sources tell us that a crack security team has been scouring restaurants searching for secure and private rooms for him to dine.

One told us, “Ahead of Prokhorov’s arrival at his chalet in Courchevel, he had a security team check out the place and all the restaurants he hopes to dine in.

They went around asking for private rooms in the restaurants. Vladimir Putin famously visited Prokhorov’s chalet last year, but now that he’s running for president, everyone presumes it won’t happen again this year.”
Posted by joe levin at 8:21 AM