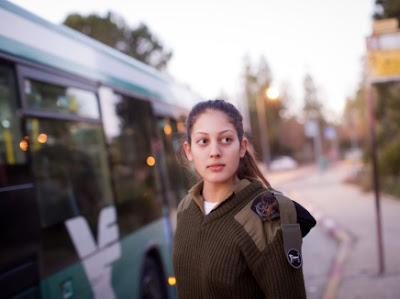 Soldier says cursed by ultra-Orthodox passenger in Jerusalem after refusing to move to back of bus. Internal security minister urges citizens to file complaints with police

The Jerusalem police on Wednesday arrested an ultra-Orthodox man for calling a female soldier a "slut" during a bus ride in the capital.

The soldier, Doron, was traveling on bus No. 49 from the Neve Yaakov neighborhood to the Central Command base in Jerusalem. After approaching the front of the bus in order to pay the driver, she was told by a haredi passenger to move to the back. She refused, and he began cursing her.

An Egged bus company worker called the police, and the man was arrested. In his investigation, he admitted calling her a "slut", explaining that the word was a proper response to "her provocative behavior".

The soldier's father said the haredi man had referred to her as a "shiksa" (a disrespectful term in Yiddish for a non-Jewish woman). He added that his daughter had filed a complaint with the police.

"When she called me, she was in tears. You must remember that she's just a girl," he recounted, adding that he was the one who encouraged her to file a complaint. He said it was not the first time his daughter was attacked.

"Two weeks ago it ended with shoving. She's afraid to get on this bus, but there's no other way. We must not give in to their whims."

Speaking during a conference on traffic laws in the community of Yad Hashmona, near Jerusalem, Lador said that "the State Prosecutor's Office will work with the police to eradicate the extremism among haredim.

"We understand that we must act against the exclusion of women and the violence we have been witnessing recently."

Internal Security Minister Yitzhak Aharonovitch called on citizens not to be afraid to complain. "I demand and ask citizens to file complaints with the police; that's the most important thing," he said.

"The moment complaints are filed, investigations will be opened and indictments will be served. The police's duty is to defend the country's citizens, not to file complaints."

Aharonovitch pointed a finger at local authorities, saying that "authority heads must wake up and do their job. At the end of the day it's a social phenomenon, which we've identified a long time ago. We have a similar story in Jerusalem's Mea Shearim neighborhood with the Sicarii faction."

'Spitting on young girl a crime'

Also Wednesday, some 250 women marched on Tel Aviv's Rothschild Boulevard as part of a protest against the exclusion of women organized by the Women's International Zionist Organization.

Tova Ben-Dov, chairperson of World WIZO Executive, said during the rally: "What is happening in Israel is a danger to democracy. It's a shame that we need Hillary Clinton and foreign television networks to warn us about it."

WIZO Israel Chairperson Gila Oshrat said, "This isn't a fight for women's rights, but for the character of the Israeli society. De-legitimization of women has made them inferior, and it's a short road to physical violence.

"Excluding women from the public sphere is violence. Spitting on a nine-year-old girl is a crime. We must stop this violence immediately."
Posted by joe levin at 3:46 PM