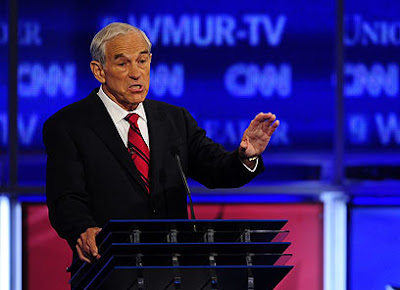 Former senior aide to Republican presidential hopeful says that while Paul is not an anti-Semite, he believes Israel is 'more trouble than it's worth'

In a blog posted in Rightwing News, Dondero said that while Paul was, in his opinion, neither a racist nor an anti-Semite, he is very much anti-Israel.

But according to Dondero, the elderly congressman "wishes the Israeli state did not exist at all.

The congressman's former aide insists in his blog that Paul expressed the controversial sentiment "numerous times in our private conversations."

Paul's view, he said, "is that Israel is more trouble than it is worth, specifically to the America taxpayer. He sides with the Palestinians, and supports their calls for the abolishment of the Jewish state, and the return of Israel, all of it, to the Arabs.

Brooks had previously called Paul's views on Israel "misguided and extreme." He was also excluded for Republican presidential candidates' panel hosted by the Republican Jewish Coalition in November.
Posted by joe levin at 4:02 PM