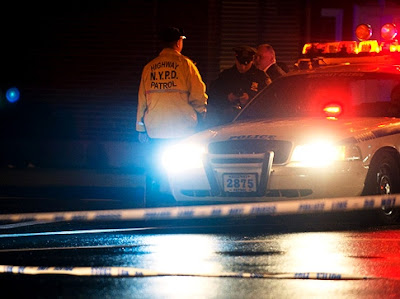 NYPD Internal Affairs is investigating the reason for a lengthy time lapse in giving a blood-alcohol test to an off-duty cop busted for drunken driving, police said.

Rafael Casiano crashed his car in Bronx around 4:36 a.m. Friday after celebrating at a precinct Christmas party. Investigators at the scene said the housing officer reeked of booze and admitted he “had a few drinks,” but he wasn’t tested for alcohol until nearly nine hours later, court records show.

By then, Casiano had sobered up enough to have a blood-alcohol level below the legal limit, court records show.

Still, investigators charged him with driving while intoxicated.

“IAB is investigating why there was an inordinate delay in it being notified,” NYPD spokesman Paul Browne said Saturday.

“Despite the delay, IAB, after interviewing EMT and medical staff and obtaining a warrant for the subject’s blood, made the determination that he was unfit for duty, arrested him for DWI and suspended him.”

Casiano’s partner, Keith Paul, 36, was a passenger in his car and suffered head and liver trauma.

The injured cop was awake and talking at Jacobi Hospital on Saturday.

She said her son doesn’t remember the wreck.

Before the crash, the two best buddies were at a Christmas party for their lower Manhattan precinct, she said.

Casiano crashed into the center median on the Cross Bronx Expressway, causing the car to roll on its side, court records show.

Two preliminary breath tests at around 1 p.m. — nearly nine hours later — showed that Casiano’s blood-alcohol content was .032 and .029. The legal limit is .08.

Casiano was arraigned Friday night for DWI and vehicular assault. He was freed on $5,000 bail, officials said.

Meanwhile, another cop, Kleaburgh Carvajal, was arrested in the Bronx early Saturday and charged with DWI, leaving the scene of an accident and refusing to take a breath test.

Carvajal tried to drive off but a truck blocked the street, according to a criminal complaint.
Posted by joe levin at 8:11 AM