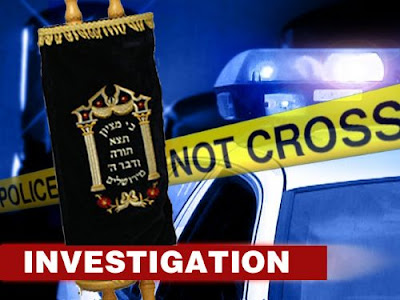 MONTICELLO — Someone broke into the Landfield Avenue Synagogue sometime between Friday evening and Saturday morning and stole a Torah scroll.

Rabbi Ben-Zion Chanowitz said he got in around 9 a.m. Saturday and noticed the break-in after a class when he went to get the scroll.

Chanowitz said he found a broken window and a couple of open doors. The burglar or burglars went into a couple of offices in the synagogue. Not much else was taken, though.

"It seemed like they were after the scroll," he said.

The scroll, or Sefer Torah, is used for Torah readings during services. It is imbued with sacred significance in Judaism and treated with great respect.

This scroll has a blue mantle. The congregation got it about a decade ago. Many members of the congregation contributed money to buy it, Chanowitz said.

The rabbi said he doesn't know what the thief or thieves plan to do with the scroll — although scrolls are expensive, a stolen scroll is not something you can easily resell.

The synagogue has another scroll it can use for now. Chanowitz said he hopes it gets the stolen one back.

"The scroll is really parchment and ink, and it's written by a scribe. But what we believe, more than anything else, is the spiritual part of the scroll," he said. "The spiritual part cannot really be sold ... because God is all over. I feel it will get back to us.

"Wherever it is, it's still ours."