Aisha Gaddafi is in exile in Algeria 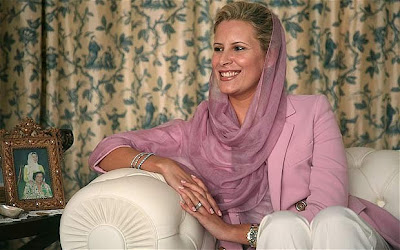 JERUSALEM - Is Aisha Kadafi, daughter of the slain Libyan ruler Moammar Kadafi, considering seeking asylum in Israel? Unlikely as it seems, according to the Israeli news site Walla!, this may be the case.

The Israeli site quoted a report published in Intelligence Online that said Aisha indicated to confidants from Europe that only in Israel will she feel safe and hopes to be allowed to live there.

In August, she fled Libya for Algeria with her mother, two of her brothers and several other family members. Recently she expressed concern that her Algerian hosts may not be able to resist pressure from Libya's new government to extradite her to stand trial along with her brother, Saif al-Islam.

The report said her friends discouraged her from making an official request for asylum in Israel, which would probably balk at harboring the daughter of a slain Arab dictator.

Aisha Kadafi already has at least one Israeli connection -- her attorney. Until recently, Nick Kaufman was a senior prosecutor with the Israeli Ministry of Justice.

The family may have had other roundabout ties.

Two years ago, Saif al-Islam reportedly negotiated with Israel through a mediator for a peaceful compromise concerning an aid ship he sent toward Gaza, where a naval blockade keeps vessels from docking.

But Aisha may not need to make a formal request and chance refusal; she might qualify for immigration rights. Stubborn rumors have persisted among Libyan Jews in Israel for years that Kadafi himself is Jewish.

In recent years, several elderly Israelis of the Jewish community that once lived in Libya have come forth with stories about the dictator's allegedly Jewish heritage.

One of them is Gita Buaron, an Israeli approaching 80. She says she is related to Kadafi, whose mother was her great-aunt. As for his children, being half-Jewish won't cut it for religious purposes if it's the wrong half -- Judaism is acquired through matrilineal heritage (or conversion) -- but it's often sufficient for immigration under Israel's Law of Return legislation.
Posted by joe levin at 7:45 AM