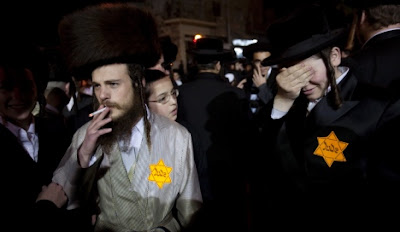 Over a thousand ultra-Orthodox men assembled Saturday night in Jerusalem’s Kikar Hashabbat (Sabbath Square), in protest of what they termed the exclusion of Haredim, a response to the recent outrage over the exclusion of women in Beit Shemesh and elsewhere.

The protesters also expressed their solidarity with Shmuel Weissfish, one of the leading activists in the radical Sikrik group. Weissfish is slated to begin his two-year prison sentence on Sunday for vandalizing a computer store in the same Kikar Hashabbat.

Some of the protesters are wearing yellow badges, with which they mean to express that they are being persecuted for their Jewishness.

A fight broke out in the crowd, after one of the participants was suspected of being a undercover police officer.

The past week has given rise to an increasingly intense confrontation between ultra-Orthodox and secular Israelis. A Channel 2 expose about an eight-year-old girl attacked by Haredi men for her ‘immodest’ attire, led to public outcry that culminated in a mass demonstration in Beit Shemesh on Tuesday.

Israelis have been also scandalized by gender-segregated bus lines and advertisers pandering to Haredi will by running ads devoid of women.
Posted by joe levin at 5:35 PM