Strauss-Kahn, centre, talks in court next to his attorney Benjamin Brafman 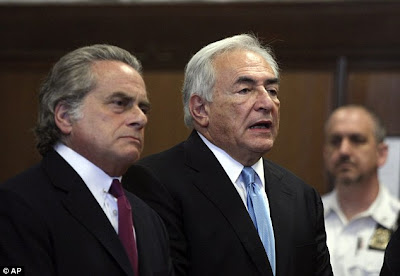 Attorney Benjamin Brafman who chalked up acquittal of Dominique Strauss-Kahn, is following Israel's legal affairs closely. Bill promoted by justice minister to restrict media is 'implausible for a society that upholds the freedom of speech,' he says

"A society which upholds the freedom of speech cannot try to stop the media from doing its work, and this is true for both the United States and Israel", says attorney Benjamin Brafman.

It's no coincidence that Brafman chooses to start this interview by commenting on the media: Last summer, he was the defense attorney in the trial of former International Monetary Fund chief Dominique Strauss-Kahn, who was charged with sexually assaulting a hotel maid in New York.

The affair sent waves through the global media for weeks, during which his client received a barrage of criticism from the press.

"I think the media was extremely hard-lined about the affair, not only in the US but in Europe as well. There were many debates on the way the press handled the affair especially because much of the information was incorrect," he claims, but nevertheless avoids striking back.

'Handcuff photos not meant to humiliate'

Brafman indeed conducts a dialogue with the media. Strauss-Kahn was just the recent client in a long list of high-profile cases taken up by Brafman, including Michael Jackson, rapper Puff Daddy and Mafioso Salvatore Gravano among others.

"When celebrities come to me, they are at the lowest point in their life. The fact that they are famous just adds to their humiliation. I deal with tsuris (Yiddish for troubles) and I single-handedly prevented more suicides than any shrink in the world."

Brafman, a Jew affiliated with the ultra-Orthodox community used to do stand-up gigs during bar mitzvahs as a young man, so humor is part and parcel of his courtroom appearances.

On one occasion in his closing arguments, he said: "The prosecution would like you to believe its story; I would like to be six inches taller. Neither of us is going to make their dream come true."

The media coverage of the Strauss-Kahn affair in the US managed to unnerve many in the French media. French intellectual Bernard-Henri Lévy was among the most prominent commentators who argued that leading Strauss-Kahn out of the Harlem police station in handcuffs in front of the cameras was a deliberate humiliation.

Brafman says, "The French were mainly surprised by the publicity of the legal proceedings, which included the photos with the handcuffs. They were vexed with the way Strauss-Kahn was portrayed and yet the case was covered by French media all summer long."

Brafman compares the way the affair was covered by the American and French media: "The US is accustomed to making a big deal out of celebrity trials. What Europe does not understand is that this happens with any court case in the US, and naturally high-profile cases get a lot more coverage.

"Anyone who is arrested gets his photo with handcuffs on in the paper. It may be regretful, but it was not aimed at humiliating Strauss-Kahn."

Brafman adds that "there was a big difference between the manner in which we handled the case and the way the other side managed it. We ignored the media, and the plaintiff's attorney tried to sell stories to the media. I think this discredited them."

Ironically, however, similar criticism was directed against Brafman himself in the New York Times, claiming he was manipulating the media by leaking information.

The media's handling of the Strauss-Kahn affair raised questions in the US regarding the issue of presumption of innocence and media coverage before a verdict was reached. Such questions are pertinent in Israel in the wake of the rape trial of former President Moshe Katsav.

"I hold many debates on presumption of innocence at New York University and in Israel as well. When the legal system clashes with the media it's a difficult situation," says Brafman, "but it cannot and should not be changed. "The Strauss-Kahn affair made front pages worldwide and this is something that must be put up with."

"I got the phone call on Saturday at 10 pm, right after the arrest," recounts Brafman. "William Taylor (who represented Strauss-Kahn with Brafman), who had connections with Strauss-Kahn in matters not related to the affair, called me from Washington.

"Taylor and I were acquainted from several cases we worked on together, and since the affair was in New York he wanted me to take the case".

Huge headlines in international papers breaking the news of the affair ended embarrassingly for the prosecution, which was forced to admit that the hotel maid lied in her affidavits.

However, the complaint led to another claim against Strauss-Kahn, which is still pending, wherein French author and journalist Tristane Banon claims Strauss-Kahn tried to rape her in 2003.

Did you secretly employ private investigators or use wire-tapping?

"I won't divulge our method of operation, but all the elements involved did their job. We did not use the media and employ manipulations. We held several meetings with the DA and we presented out stand.

"Any claim that we manipulated the media is false. We did not respond to the media aside from commenting that since no force was used there was no criminal aspect.

"It was the plaintiff and her attorney who held numerous press conferences. I know when to speak in public and when not. We decided not to talk to the press."

An equally intriguing figure in the Strauss-Kahn affair was his wife Anne Sinclair, a leading journalist who stood by his side and paid the $5 million bail for him. She continued supporting him even after they returned to France, when new allegations began surfacing.

"Anne is an impressive figure who was very involved in the case," says Brafman.

You told the New York Times in the past that sometimes one has to tell a client, 'That's it. This is not good for the case and we're going to do it my way.' Did anything of the sort happen in the Strauss-Kahn case?

"Absolutely not. Strauss-Kahn and his wife were very easygoing clients. They dealt with what was going on, understood and gave attention to the problems. They realized that the media cannot be satisfied and if we start talking it would be impossible to stop.

"I had famous clients who came to loggerheads with me for not letting them speak to the press. This time things were the other way around. They are extremely intelligent and understood that we are doing everything in our power and that the media coverage will not get any better until we get all the charges dropped."

Nonetheless, Brafman knows that despite his success, a trial victory is not all that counts. "Even if you beat criminal proceedings, your life changes for ever. Take Strauss-Kahn, who could have run for president in France.

"Another example is President Moshe Katsav. Even if he were acquitted, allegations alone could still have ruined his reputation."
Posted by joe levin at 8:29 AM