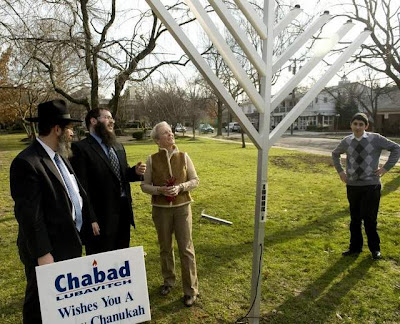 HADDONFIELD, N.J. - A symbol of Judaism has been snatched right in the middle of Hanukkah. There's outrage in the South Jersey community where it happened.

Police are searching for the thieves who are responsible for taking a symbol of Hanukkah right in the middle of the Jewish holiday.

Someone stole the menorah from Library Point Park in Haddonfield.

This is supposed to be the season of joy and goodwill toward your fellow man and woman. So, why would someone do this?

Not for the reason you may think:

All that's left of a 6-foot-tall menorah that stood in the park in Haddonfield. Late Tuesday night or early Wednesday morning, someone made off with the religious symbol.

"This is a time of peace and joy and, for whatever reason – it should be here. I feel bad about it," said Susan Briant, the library director.

"It's crazy. Why would somebody steal a menorah?" asked Buz Murphy, of Haddonfield. Asked if he thought it could be a hate crime, Murphy said, "I think stupid crime."

Stupid, yes. But police don't think it was a hate crime, because the vandals left the sign next to it alone. There was no graffiti, nothing suggesting hate or intolerance. So then, the motive?

"We really don't know, but the police have told us they believe that someone might have taken it for scrap, which would be unfortunate because it's worth much less in scrap than what it really is, as its value," said Rabbi Mendel Mangel, of Chabad Lubavitch.

That's right. The thieves may have stolen the aluminum menorah to sell it as scrap metal.

"They wouldn't take a Christmas tree for the wood," Murphy remarked.

They did leave the Christmas tree and the nativity scene alone. The motive behind the theft may have been economic, but the congregation responsible for the menorah is appalled nonetheless.

"It's an attack not just on the Jewish religion, but on all peace-loving people. And just the response from Jews and non-Jews alike has been incredible," Mangel said.

The congregation returned Thursday to erect an even bigger menorah in its place.

"That is the Jewish response, it is the American way, to rebuild, regroup, and grow larger," Mangel said. "We had a 6-foot menorah. Now we have a 9-foot menorah."

The police chief in Haddonfield says his force is going to keep an extra close eye on the new menorah to deter anyone else from getting any bad ideas, Gomez reported.