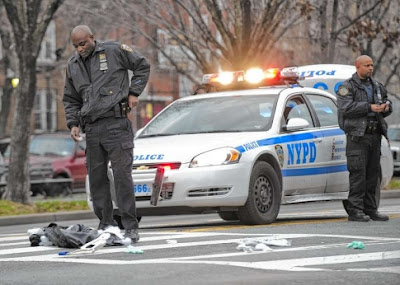 Community leaders are banding together to make sure one of Donna Fountain’s dreams didn’t die with her.

The single mom was carrying a list of her life goals when she was killed by a hit-and-run coward Christmas morning. Among them: making sure son Elijah graduated from college.

State Sen. Eric Adams announced the creation of a scholarship fund for the 8-year-old boy on Friday, launched with $25,000 in donations.

“There's nothing we can do to take back that nightmare,” Adams said of the crash on Eastern Parkway.

“But today we’re going to continue her dream of giving her son an education.”

“If he doesn’t have a mother at least he should get the right teaching in school and a proper education,” Rabbi Joel Friedman said of young Elijah.

The child’s uncle, Ben Fountain, said the family is concerned that while he has been told his mother is dead, he has not grasped it yet.

“He and my sister were joined at the hip. He doesn’t understand that she will not be returning in this life.”

He said that after the holidays, Elijah will live with him in Westchester. He was touched that so many strangers dug into their pockets to ensure the boy’s future.

“I am completely moved by it,” he said.

Officials said there is also a $2,500 reward for information leading to the arrest of the driver who left the home health aide dying in the street.

Fountain’s family said police told them they have located the car that hit her, but are still looking for the driver.

“Now is a good time to do the right thing and surrender to the authorities,” Councilwoman Letitia James (D-Brooklyn) said.

“If you don’t, rest assured we will all be at criminal court to make sure you are prosecuted to the fullest extent of the law.”

Ben Fountain said he has no doubt police will make an arrest. In the meantime, he is concentrating on arrangements for a funeral 7 p.m. Tuesday at the Safe Gospel Assembly Church at 777 Rutland Road in Brooklyn.

Anyone with information about the driver who hit Donna Fountain is asked to contact Crime Stoppers at (800) 577-TIPS.