Escape: Residents flee their apartments. One man, pictured, is escorted from his home with a cage of birds 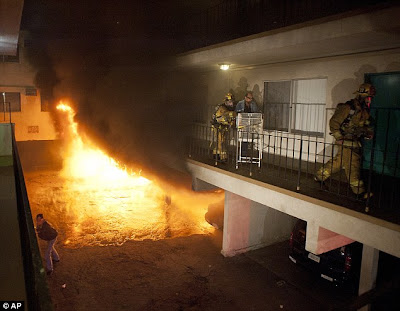 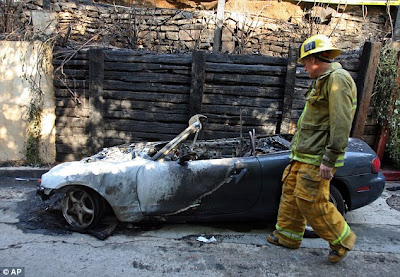 Los Angeles authorities investigating a string of more than 35 fires set over the last two days strongly suspect the blazes are the work of more than one arsonist.

On Friday morning, 21 fires were started in a relatively small area around Hollywood and West Hollywood. On Friday night and Saturday morning, 16 more fires were reported. They were similar to the ones in Hollywood but were spread out over a much larger area.

Eight of the fires occurred in North Hollywood, three in the foothill area of the San Fernando Valley, three in the Wilshire Division of the Los Angeles Police Department, one on the Westside and one in Lennox.

Law enforcement sources told The Times that it would be difficult -- but not impossible -- for one person to set all those fires. The sources, who spoke on the condition of anonymity because the case was open, said it's possible there is more than one arsonist or that some fires are the work of copycats.

One source said a single arsonist would have to be a "superman" to have set all the blazes Saturday morning.

Officials described the blazes set Friday as one of the worst arson rampages in Los Angeles in recent history.

Among the properties damaged was the Hollywood Hills home where The Doors' Jim Morrison once lived. The home inspired Morrison's song "Love Street."

Friday night's fires left L.A.-area residents on edge and investigators perplexed as they began the painstaking search for clues on who had set the fires and why.

Nearly all of the fires began with a vehicle being set ablaze. Several times, however, the flames jumped to nearby apartment buildings or houses, causing significant damage at some of the locations.

Estimates of the total damage were not available, although officials from the Los Angeles County Fire Department said that four fires set in West Hollywood alone destroyed about $350,000 worth of cars and property.

One firefighter suffered back and neck injuries and was taken to a hospital.

His condition was not thought to be serious.

The only clue officials have released about the Saturday fires is that they are looking for a male driving a white and tan mid-1990s Lexus ES300. No further description of the suspect was released.