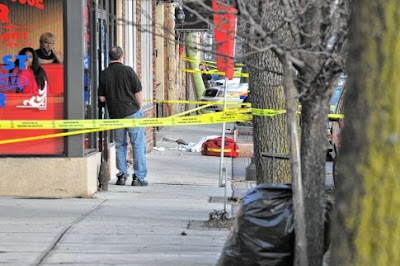 A federal agent was fatally shot Saturday outside a Long Island pharmacy in a gunfight involving an armed robber, an off-duty NYPD cop and a retired Nassau County cop, officials said.

The thief, a local man in his 40s whose name was not immediately released, also was shot to death at the scene.

He had entered Charlie’s Family Pharmacy in Seaford, flashed a gun and announced a stick-up just before 2 p.m., Nassau County police said.

Leaving with a stash of stolen Oxycotin and cash, he was confronted outside by the off-duty NYPD cop, a retired Nassau County cop and a federal agent with the Bureau of Alcohol, Tobacco, Firearm and Explosives, police said.

One of the law-enforcement agents fatally shot the robber.

But the ATF agent, Jonathan Capano, 51, was also shot in the confrontation, officials said. It was not immediately clear Saturday night who shot Capano.

Capano, a father of two girls who lived in Seaford, was rushed to Nassau University Medical Center, where he died, officials said.

“He was a family man and a hero,” said Chief Joseph Anarumo of ATF, who noted that Capano had done a four-month tour in Iraq and Afghanistan.

The violence erupted about 30 miles from a Medford pharmacy where a druggie fatally shot four people in July.