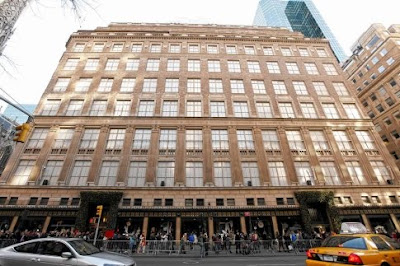 Shoppers said the sale spawned a madhouse of elbow-to-elbow bargain hunters tussling over footwear and jockeying for position to pay before the deadline.

“The line wrapped around the floor,” a frazzled shopper, who did not want to be identified, told the Daily News. “There were too many people. They were pushing and shoving. It was a zoo.”

She said civility quickly deteriorated when an announcement was made over the store’s PA system that the 60% off sale was ending and would not be extended beyond noon.

After noon, shoes would be only 40% off.

People in line panicked, thinking they wouldn’t reach the checkout counter in time, the witness said, and two women were fighting.

She said that people fled the floor as security moved in to put a lid on the shoppers’ rage.

Security guards at the iconic midtown department store confirmed that the eighth-floor women’s shoe section was shut down and cleared out about 11:30 a.m. because of overcrowding.

“It was crazy,” said one guard.

The upscale store’s spokeswoman did not return calls for comment.

There were no reports of injuries. The NYPD said it was not called to the store to make arrests.

“It was good just to get the opportunity for this sale,” said Rosa Salaz of Washington Heights, who braved the crowded aisles of Macy’s Herald Square with her son Anthony, 14.

Salaz said she started out shopping for a discounted artificial Christmas tree to use next year, but changed her mind when she found hundreds of other shoppers looking for the same thing.

Instead, she found some nice bargains for pots, pans, bedsheets and towels.