UPS yours: Spotting the camera, he flicks the middle finger at it 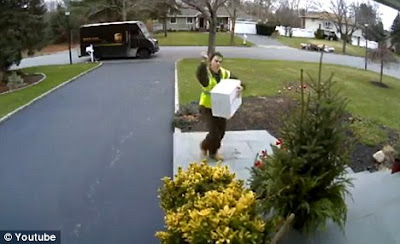 A UPS delivery man was caught on surveillance video flipping the middle finger at the camera before throwing the package roughly on the door step.

The worker in question was fired after the video went viral.

He was making the delivery to a home in Long Island on December 15.

UPS spokeswoman Natalie Godwin said: 'We don’t tolerate such conduct. And yes, he was fired.

She said he was a seasonal employee.

He was delivering a white box from Zappos. As he cooly strides up the path, he flips the middle finger at the camera before flinging the heavy parcel at the door and walking off.

The video was published just days after a video of a Fedex employee heaving a computer monitor over a fence to a southern California home went live.

After the FedEx employee's conduct became a hit on the internet, a company vice president issued his own YouTube video apologizing and promising the delivery employee would no longer work with customers.