Outside 57 St. James Place in Newark where a two-year old was shot and killed. 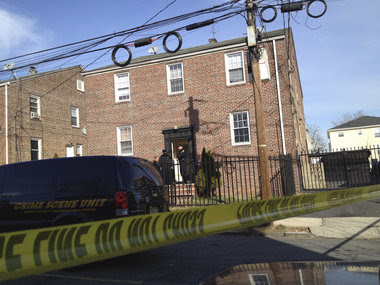 NEWARK — Police are searching for a man in his 20s who might have been involved in the fatal shooting of a 2-year-old boy in Newark’s South Ward, city police Director Samuel DeMaio said.

"As of now, we know for a fact the shot came from within the house," DeMaio said "There was a male that was with the child's mother when they arrived at the hospital."

The child was discovered in a St. James Place apartment and the death was confirmed after 10:30 a.m. by the Essex County Prosecutor’s Office, whose investigators are now interviewing possible witnesses.

The man and woman apparently brought the child to Beth Israel Medical Center together, and the man left. Police began searching for him to question him. Detectives are currently questioning the child's mother.

"Either the child was playing with the gun and it was an accidental shooting or someone within the apartment shot the child." he said.

Investigators from the prosecutor’s office, the lead investigative agency, are looking for a weapon and for more witnesses but have secured a search warrant for the St. James Place home. The apartment, on the 100 block of St. James, is one of four in a brick, 2-story house in a residential neighborhood near Beth Israel, where the child was pronounced dead.

Kim Dixon, who lives two doors from the home, said she was in her upstairs bedroom when she heard a commotion at the house.

“I heard two people arguing,” Dixon said. “I didn’t know what it was about.”

A few minutes later, police had descended on the neighborhood, she said.

According to the prosecutor’s office, the child suffered a gunshot wound to the head.

The child’s death is the city’s second fatal incident involving a shooting in about 12 hours.

Last night, a person was shot and killed on Brookdale Avenue in the city’s Lower Vailsburg neighborhood, the prosecutor’s office confirmed.

That homicide was the city’s 89th so far this year. Authorities have yet to release details on that shooting.

If this death is ruled a homicide it would be the city's 90th.