Shlomo Fuchs, 44 Is it sexual harassment to call someone a slut? 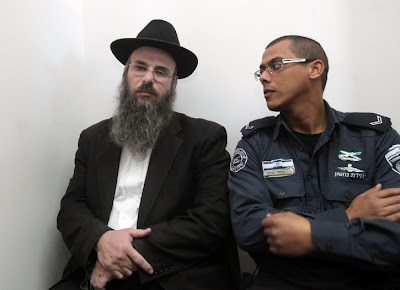 Shlomo Fuchs, 44, accused of sexually harassing female soldier on public bus, files appeal with J'lem court. 'Unpleasant remarks are heard every day, most of them sexual,' he claims

Is it sexual harassment to call someone a slut ?

Jerusalem resident Shlomo Fuchs, 44, accused of sexually harassing Doron Matalon, a female soldier on a public bus, calling her a "slut," has filed an appeal with the city's Magistrate's Court on Friday.

"Unpleasant remarks are heard every day in Israel, including some which may be considered humiliating, and most of them are based on a person's sexuality. Those who curse are never put on trial," Fuchs claimed in the appeal.

Fuchs also claimed that even if cursing a woman "is deserving of moral obloquy, it does not constitute a criminal offense of sexual harassment." He further stated that the decision to put him on trial is based on an unfounded perception, claiming "there is no reasonable ground to suppose that the court… will not acquit the claimant.

Even if the expression he used was unpleasant to hear, the appeal stated, Fuchs should not be arrested for it, adding he's not considered a threat to the public.

'Not a sexual offender'

"I am not a sexual offender," Fuchs, father of 12, told his attorney on Thursday. "If anything – she harassed me. I wanted to move away and she kept moving closer."

Fuchs' attorney claimed this was not a criminal offense. "We live in a free country. We're allowed to curse, its part of the freedom of expression," he explained.

If the court does decide this is a sexual harassment case, said the attorney, then any man who calls a woman a "bitch" or other curse words would be considered a sexual offender.

According to the appeal, the Jerusalem court has no foundation to determine whether this is a growing phenomenon. Fuchs attorneys believe that the police was likely influenced by the current atmosphere. "Fuchs has nothing to do with Beit Shemesh."

Police officials said Fuchs' behavior was unruly, and that he sexually harassed Matalon by humiliating her and making sexual remarks.

The indictment against Fuchs follows a warning issued by Israeli authorities saying they would not tolerate the exclusion of women from the public sphere or any acts of violence towards women. State Prosecutor Moshe Lador stressed that "the prosecution will work with the police to bring this radical phenomenon of haredi extremism to an end.
Posted by joe levin at 3:16 PM