Nasty surprise: A third of the 5,000 petitions filed with Divorce-Online in the past year mentioned Facebook 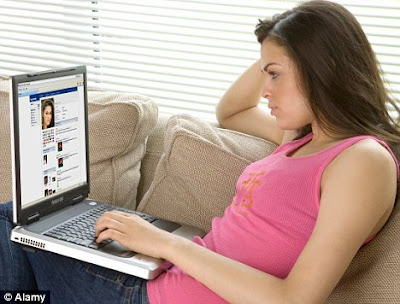 Facebook is becoming a major factor in marriage breakdowns and is increasingly being used as a source of evidence in divorce cases, according to lawyers.

The social networking site was cited as a reason for a third of divorces last year in which unreasonable behaviour was a factor, according to law firm Divorce-Online.

The firm said it had seen a 50 per cent jump in the number of behaviour-based divorce petitions that contained the word ‘Facebook’ in the past two years.

Mark Keenan, managing director of Divorce-Online, said: ‘Facebook has become the primary method for communicating with friends for many people.

People contact ex-partners and the messages start as innocent, but lead to trouble.

If someone wants to have an affair or flirt with the opposite sex then it’s the easiest place to do it.

Thirty-three per cent of the 5,000 behaviour petitions filed with the firm in the past year mentioned the site.

The most common reasons for Facebook causing problems in relationships were a spouse finding flirty messages, photos of their partner at a party they did not know about or with someone they should not have been with.

Anne-Marie Hutchinson, at Dawson Cornwell Solicitors, said: ‘If you are keeping things from your partner, Facebook makes it so much easier for them to find out.

She said the site can be used as evidence of unreasonable behaviour, adding: ‘If you are complaining that they have a drinking problem and they have posted statuses about going out on the razzle... that could be used.

Mr Keenan said he warned his clients to keep off Facebook while going through divorce proceedings.

He added: ‘People need to be careful what they put on Facebook as the courts are now seeing a lot more evidence being introduced from people’s walls and posts in disputes over finances and children.

Email ThisBlogThis!Share to TwitterShare to FacebookShare to Pinterest
Labels: CNN