Toddler: Ayla Reynolds, of Waterville, Maine, was reported missing from her bed on Saturday morning 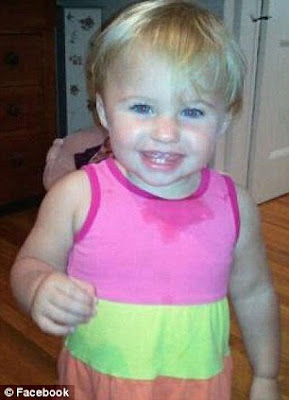 *Five-figure reward largest ever offered in the state for a missing person.

A 20-month-old girl who vanished a week before Christmas after being put to bed in her father's home was taken away and didn't walk out on her own, investigators said today as they announced the largest reward ever offered in the state to help find a missing person.

It marked the first time since the search for Ayla Reynolds began that police have directly said they don't believe she left the house by herself.

At this point in the investigation... we are confident that Ayla did not walk out of the house by herself,' Waterville police Chief Joseph Massey said at a news conference at which he announced a $30,000 reward was being offered for help finding her.

We believe that someone was involved in taking her out of the house, and that's where the focus of this investigation has turned.

The reward, gathered with donations from residents and businesses in the Waterville area, is the biggest ever offered in Maine for a missing person, state Department of Public Safety spokesman Steve McCausland said.

Massey said the developments in a mystery that's been featured on national television programs have not shifted the matter from a missing-person case to a criminal investigation. Despite the passing of the Christmas holiday with no sign of Ayla, police remain committed to finding her, the chief said.

The intensity of the investigation is as high today as it was the first day,' he said. 'We continue to employ every single resource we have.

Massey was joined at the news conference by Waterville attorney John Nale, who appealed for the safe return of Ayla.

I ask and I plead with the person or persons who have Ayla Reynolds that they please keep her safe and return her safely to us,' Nale said.

Hundreds of police officers, game wardens and local residents have been searching for Ayla since she was reported missing by her father, Justin DiPietro, on the morning of December 17. Massey said a report about the case on the Fox network television program 'America's Most Wanted' during the weekend generated some leads, which are being checked by police.

DiPietro told investigators he last saw Ayla when he put her to bed the night before at his home in Waterville, a city of 16,000 residents about 20 miles north of the state capital, Augusta.

He said she was wearing polka dot pajamas with the words 'Daddy's Princess' on them and had a cast on her broken left arm.

Ayla ended up with her father after child welfare workers intervened while her mother, Trista Reynolds, checked herself into a 10-day rehabilitation program.

Reynolds, who completed the rehab, had filed court papers that she said she hoped would lead to the return of her daughter.

The filing came the day before Ayla was last seen.

Appearing on the Today show last week, Reynolds said she blames DiPietro for their daughter's disappearance.

I trusted him to keep her safe,' she said.

'And now she is missing and I don't know where she is. I blame him right now. He did not protect her the way he was supposed to.

DiPietro has said he has 'no idea what happened to Ayla or who is responsible.

I will not make accusations or insinuations towards anyone until the police have been able to prove who's responsible for this,' he said.

He said last week his family and friends would do 'everything we can to assist in this investigation and get Ayla back home.