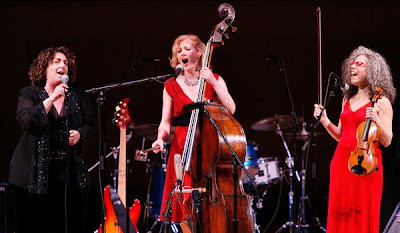 Adrienne Cooper an American-born singer, teacher and curator of Yiddish music who was a pioneer in the effort to keep the embers of that language smoldering for newer generations, died on Sunday in Manhattan. She was 65.

The cause was adrenal cancer, said her daughter, Sarah Mina Gordon, who is also a Yiddish singer.

Though the movement Ms. Cooper helped start in the 1970s and ’80s was often described as a Yiddish revival, less sentimental observers acknowledged that a true revival of the spoken language among secular Jews was unlikely, given that people who had learned it in their homes, like Holocaust survivors and children of turn-of-the-century Jewish immigrants, were dying out. But because of the teaching and organizational work of Ms. Cooper and a handful of others, klezmer has become a popular current of the music mainstream and Yiddish courses are given at scores of colleges.

“She was in a way the mother of the revival,” said her friend Alicia Svigals, a klezmer violinist.

Ms. Cooper, blessed with a lush, expressive mezzo-soprano and a crusader’s fervor, shepherded dozens of young performers into Yiddish music and its bedrock culture.

She taught Yiddish songs — obscure ones she unearthed, not just beloved chestnuts like “Raisins and Almonds” — to students in a Yiddish program given at Columbia University by the YIVO Institute for Jewish Research, and in programs she arranged through her most recent position as a cultural executive at the Workmen’s Circle, the Jewish social welfare organization. Her interpretations were enriched by the context she brought as a onetime history student.

“Her performance has a depth and emotional fire that made it clear she understood where these songs came from,” said Samuel Norich, publisher of The Forward, the Jewish newspaper.

She was one of the two founders of KlezKamp, which since 1985 has convened annually in late December in the Catskills and become an incubator of klezmer musicians like the clarinetist Michael Winograd and a floating academy of Yiddish culture. It draws hundreds of musicians, connoisseurs of Yiddish language and amateur anthropologists eager to delve into the extinguished Jewish cultures of Eastern Europe.

Ms. Cooper, who called the gathering “a flying shtetl” and taught there, was the associate director of YIVO in the early 1980s when she turned a notion brought to her by an archivist of hillbilly music into reality, persuading officials like Mr. Norich, then YIVO’s executive director, to finance it.

News of Ms. Cooper’s death came just as KlezKamp was gathering in Kerhonkson, N.Y. Henry Sapoznik, a Ukrainian cantor’s son and the archivist who was the other founder, said the news “cast a pall, but at the same time people realize that her contributions are really present.”

On the liner notes of her last album, “Enchanted,” Ms. Cooper wrote that she and her friends embraced Yiddish for its “hard-to-describe delights, for the rage it brings to injustice, for its wonderful weight on the tongue, for the arc it forms between poles of Jewish identity — from otherworldly to this worldly, from grit to grace — and for the astonishing ushpizin, unexpected guest spirits, who show up and have what to say.”

Ms. Cooper was an inveterate performer, singing about vagabond peddlers, Yiddish poets, labor leaders, Hasidic masters, even gefilte fish. As an ardent feminist, she often sang about the struggles of women.

She sang and recorded with klezmer performers like Ms. Svigals and bands like Kapelye, the Klezmatics, the Klezmer Brass All-Stars and the Flying Bulgar Klezmer Band. She brought music about tenements and ghettos to Carnegie Hall and European concert halls.

She also composed Yiddish music with her partner, the pianist Marilyn Lerner, and the poet Beyle Schaechter-Gottesman, and created several musical works: “The Memoirs of Gluckel of Hameln”; “Esn: Songs From the Kitchen,” where a feast was cooked onstage; and “Ghetto Tango,” which she wrote with Zalmen Mlotek, artistic director of the National Yiddish Theater-Folksbiene.

Ms. Cooper was born on Sept. 1, 1946, in Oakland, Calif. Unlike Mr. Norich and Mr. Sapoznik, who grew up in the Yiddish-speaking homes of Holocaust refugees, Ms. Cooper was reared in an English-speaking household. But she was surrounded by Jewish music — her mother, Buni, performed in opera and musical theater, her grandfather was a synagogue prayer leader and her grandmother made wax discs of Yiddish folk songs.

She studied vocal music with her mother’s teacher and then in Jerusalem, where at Hebrew University she also completed her undergraduate studies. She received her M.A. in history from the University of Chicago and then in New York studied with Lazar Weiner, a composer of Yiddish songs, and Wolf Younin, a poet and lyricist.

In addition to her daughter and Ms. Lerner, she is survived by her mother and her brothers, Michael and Stephen. Ms. Cooper was divorced from Jonathan Gordon in 1984.

While many looked on the revival efforts as quixotic, Ms. Cooper, her daughter said, “was fearless” and was “not burdened by counting numbers.”

“She was interested in people expressing their Judaism through their language and their culture,” Ms. Gordon said. “She taught people how to do that.”
Posted by joe levin at 7:43 AM