Zalman Cohen is a Hatzalah first responder for the North Miami Beach area. 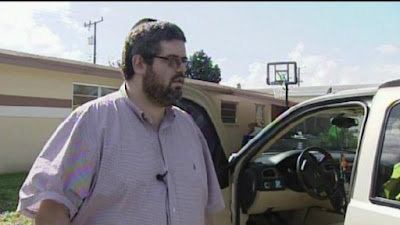 Zalman Cohen is a Hatzalah first responder for the North Miami Beach area. Hatzalah is a non-profit emergency response service staffed by Jewish volunteers that responds to emergency calls.

Cohen said someone broke into his Chevrolet Suburban on Friday and stole several items inside, including communication equipment, oxygen masks, respiratory aids and a stethoscope, all worth thousands of dollars. "They had the audacity to take a trauma bag," said Cohen. "There was a call that we couldn't go on because we had no equipment."

Dahan said, "Now his equipment has to be replaced, and somebody has to sponsor those thousands of dollars to be able to get him back on the street [so he can] be able to save more lives."

Cohen's equipment has been replaced, but he says he cannot understand why anyone would want to steal medical supplies. "I don't know what they would do with it. This is not something you can sell to get money for Christmas, for PlayStations," he said. "Going after trauma equipment, that's the lowest of the low."

Cohen is now able to go back to work, but he would still like his equipment returned.

If you know who is responsible for stealing the medical equipment, call Miami-Dade Crime Stoppers at 305-471-TIPS. Remember, you can always remain anonymous, and you may be eligible for a reward.