Toronto police are investigating after a four-year-old girl was found outside a Toronto home overnight, Monday, Dec. 26, 2011. 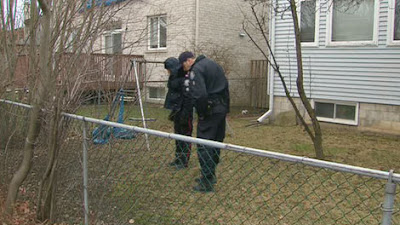 Toronto, Canada - A day after warning residents that a man who abducted and sexually assaulted a four-year-old Orthodox girl might strike again, Toronto police moved Wednesday to quell public fears.

In a news conference just steps from where the Dec. 26 incident occurred, Det. Sgt. LeeAnn Papizewski of the sex crimes unit assured residents “all resources possible” were being devoted to the investigation.

“We have a large team of investigators working on this case, and we have done so since we received the call. It is not a common call that we receive at our service, and, in fact, it is extremely rare,” Papizewski said, noting officers from across the city had been enlisted to help.

A command post was set up on Charleswood, in the north Toronto neighbourhood where the attack took place.

We have increased patrols in the area, and we’re doing everything that we can to solve this,” Papizewski said.

Police also were calling on residents with home surveillance systems to turn over any potentially relevant footage.

The four-year-old victim reportedly was visiting Toronto from Connecticut for the holidays when she was abducted. Police allege she was taken from the room where she was staying, at about 3 a.m. on Boxing Day, when a family member awoke to find the girl missing.

Relatives found her shortly afterward on a neighbour’s lawn. A suspect, described as a young white man between five-foot-six and five-foot-10, wearing a blue jacket or sweatshirt and a blue tuque with a stripe, was seen fleeing the scene.

Members of the community have provided police with “a wealth of information,” Papizewski said, but she urged others to come forward to aid the “very sensitive, very flowing” investigation.

Officers were also digging through old records for reports of any similar past incidents in the area.

Police have still not clarified how the suspect gained entry to the girl’s home. The four-year-old, who was hospitalized after the assault, has since been released.
Posted by joe levin at 8:14 PM