A hunt is underway for Banana Sam, a 17-year old squirrel monkey. 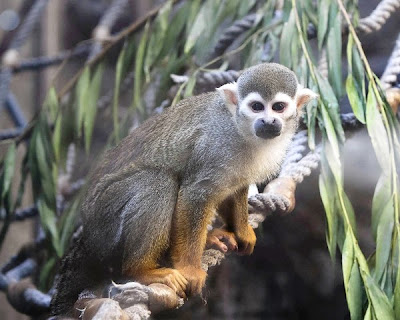 A hunt is underway in San Francisco to find a 2-pound squirrel monkey that disappeared from the zoo Friday morning after vandals broke into his exhibit.

Sam is 1 foot tall and looks harmless but has sharp teeth and "will definitely bite if provoked," San Francisco Zoo officials said in a statement.

"He is a valued member of the zoo, and we wish for a safe and speedy return," officials said.

It's unclear whether he escaped on his own or if the vandals stole him.

By Friday afternoon, someone had created a Twitter account for the missing monkey and was tweeting the primate's experiences around town.

"OMG YOU GUYS RAINFOREST CAFE IS NOT WHAT IT SOUNDS LIKE," said another tweet. "It's basically an Applebee's with a 'Sounds of the Jungle' CD playing. I'm out."

Surprisingly, Banana Sam isn't the first missing zoo creature with a Twitter account. An Egyptian cobra that disappeared from the Bronx Zoo in April managed to attract 200,000 followers before he was found six days later — still at the zoo, curled up in a dark corner of the reptile house.

Just in case, anyone with information on Sam's location can call the San Francisco Police Department at (415) 553-8090.

A private donor has issued a $5,000 reward for the monkey's safe return.