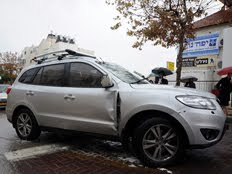 One photographer injured in incident that occurred a day after a Haredi man was arrested in Beit Shemesh on suspicion of cursing and spitting at a woman.

A Channel 2 news team was attacked and beaten by 200 Charedim men on Sunday morning in the central Israeli city of Beit Shemesh.

Stones were thrown at the news team’s jeep. One camera was also broken in the incident.

Police and an ambulance crew rescued the news personnel.

The jeep’s windshield was smashed and its tires slashed.

One photographer suffered an injury to his hand and required medical treatment.

The incident occurred a day after a Charedi man was arrested in Beit Shemesh on the suspicion of cursing and spitting at a woman last week.