Eight years old girl, Naama Margolese sits with her mother Hadassah at their house in the city of Beit Shemesh. Dec 25, 2011. The third-grader sayd she finds the 300-meter walk from her house to school terrifying because for months 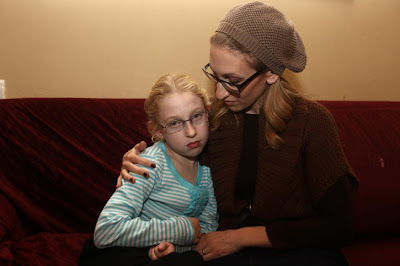 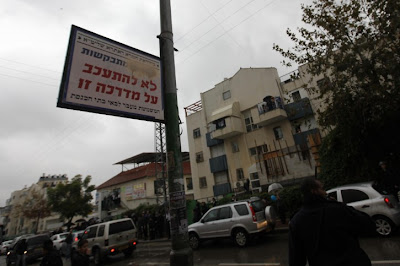 Jerusalem - Police and municipal inspectors removed signs in a haredi (ultra-orthodox) area of Beit Shemesh calling for segregated sidewalks for women on Sunday night. Police said crowds of men surrounded the inspectors, adding that the crowds were dispersed without incident.

The sign removal followed a report aired by Channel 2 on Friday night showing an eight-year old modern orthodox girl afraid to walk 300 meters to school because of harassment from some haredim because of her attire. The reporter also interviewed a haredi man saying it was permissible to spit at even a school age girl if she was not dressed “properly.”

Earlier on Sunday, a crowd of haredim [ultra-Orthodox] attacked a Channel 2 camera crew in Beit Shemesh. The crew was in the city to film street signs discriminating against women as a follow-up of their original exposé, and were attacked by residents opposed to their presence.

“They called us ‘Israel haters,’ beat us with their hands and threw stones at us,” a Channel 2 reporter said.

The crew alerted the police who arrived at the scene of the incident. “If the police hadn’t intervened within 10 minutes, I don’t know how it would have ended,” the journalist said. The police escorted the team out of the city.

The reporter said that the assailants smashed the windows of the cars that the team had arrived in, and also broke some of the equipment they were carrying.

He explained that they had gone there following Prime Minister Binyamin Netanyahu’s statement earlier in the day, saying that discriminatory signs should be removed.

The reporter emphasized that no one tried to stop the attack, and added: “I don’t know if they recognized me from the report that we filmed in the city, but that’s not important… All morning people were talking about an extreme group.
Posted by joe levin at 2:43 PM