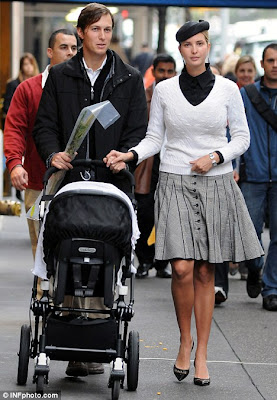 Designer Derek Lam has sent a cease-and-desist letter to Ivanka Trump, saying she "blatantly and intentionally copied" his shoe design.

The company is contesting the resemblance between Trump's "Cadie" wedge sandal, that retails for $150 at Bloomingdales, and Lam's own "Ayami" design that sells for $780, Women's Wear Daily reported Thursday.

"We have seen very similar copies before but we have never seen a shoe that perfectly copied," said Jan-Hendrik Schlottmann, chief executive officer of Derek Lam. "It's such an investment to make a shoe … we had to protest this."

Trump's shoe line has seven days to pull the sandal from the shelves, according to the letter.

Trump, the eldest daughter of real estate mogul Donald Trump, launched her jewelry collection in 2010 and added a footwear and handbag line in 2011.

The 30-year-old, who welcomed a daughter with husband Jared Kushner in July, is gearing up to launch a clothing line next Spring.
Posted by joe levin at 5:32 AM