Toronto police say the girl, who was visiting from Connecticut, was snatched from the home near Bathurst Street and Wilson Avenue around 3 a.m. Monday 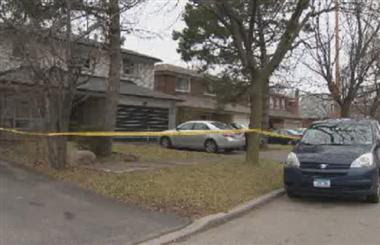 TORONTO - Toronto police are looking for a male suspect who allegedly abducted a young girl from her home and sexually assaulted her early this morning.

Police say the man entered a residence in the area of Bathurst Street and Wilson Avenue about 3 AM.

Det. Cst. Elena Vander Meer of the Sex Crimes Unit says family members located the girl within minutes after the alleged abduction and saw a man fleeing the scene.

Police say the man was last seen wearing a blue jacket with a red stripe or a sweatshirt and a toque, hat or hoodie.

Police are requesting the public's assistance with any information regarding the incident.

Between 3 and 3:30 a.m. the parents of the girl “awoke to find that the child was not in her bed,” Detective Constable Roger Villaflor with the Toronto Police sex crimes unit later told reporters at the scene.

The girl’s family members quickly ventured outside of the house, where they spotted the girl across the street in the yard of a neighbour, just as a man was fleeing the scene. The whole episode lasted “minutes,” reported a Toronto Police release.

As the four-year-old was loaded into an ambulance to be taken to the hospital for examination, police were initially unsure if the child has been sexually assaulted. “We do a broad investigation and once we start to have some facts, we narrow it down,” Staff Sergeant Andy Norrie told the Post Monday afternoon. By Monday evening, however, police were able to confirm that the girl had been the victim of a sexual assault.

The child is now in the care of family. According to neighbours interviewed by Global News, the girl was in town from Connecticut to celebrate Hanukkah with her grandparents. Police are saying the assailant was a complete stranger to the family.

The incident occurred on Charleswood Drive, a short suburban street just north of Highway 401, near the intersection of Bathurst and Wilson. The back fence of the property opens onto a Wilson Avenue strip mall. On Monday morning, many neighbours awoke to the news after seeing police cars and news vans parked outside the single-storey home, which was marked off with police tape. Throughout the day, as investigators combed through the yard where the girl was found, officers knocked on doors throughout the neighbourhood looking for information. “I did not see anything; all I can say is I’m so sorry for what happened,” one elderly neighbour told the Post by phone.

Nevertheless, by mid-day police has uncorroborated reports that neighbours had heard a scream before seeing a man running from the scene. “There were some witnesses who saw somebody fleeing,” said Staff Sgt. Norrie. Police say the suspect is a white male, 19-20 years of age and between 5’6” and 5’10”. He was spotted at the time of the crime wearing a blue jacket with a red stripe or a sweatshirt and a toque, hat or hoodie.

Police are asking for the public’s assistance in the case. “Please retweet and help [Toronto Police Service]!” wrote Toronto Deputy Police Chief Peter Sloly in a Monday Tweet linked to a story on the attempted abduction.
Posted by joe levin at 12:34 PM